Kim Wheeler is a minor villainess in 2001 movie 'Valentine'played by actress Benita Ha.

Kim is the attractive stepmother of one of the films main characters,Dorothy Wheeler (Jessica Capshaw).

However they are both very young and around the same age whereas Dorothys Dad is in his 50s and very wealthy, giving the impression Kim has motives for her best interest and also a goldigger. As a stepmother to Dorothy, Kim likes to oppose that she has power over her behind Mr Wheelers back.

Just before Dorothy walks into the Wheelers residence, Kim's first seen giggling whilst being chased upstairs to the bedroom by Mr Wheeler, wearing just her night gown.

Minutes later in the scene Campbell shows up explaining to Dorothy that hes having life struggles and hasnt even got a roof over his head which leads to Dorothy insisting he stays at hers and has one of her maids have him a room ready. Just as Campbell walks out to grab his bags Kim then walks down the stairs checking him out and jumping at the chance to taunt over Dorothy, leading to a confrontation.

Kim Wheeler : Who's your friend?

Dorothy Wheeler : His name's CampbeII. I met him at yoga and he's off-Iimits. So let my dad know he's staying here for a few days.

Kim Wheeler : Is he the reason you're always spending your time on the treadmiII?

Kim Wheeler : I'm just taking an interest in your Iife Dorothy. You know, as your stepmom.

Dorothy Wheeler : When you're oId enough to rent a car, we can discuss your roIe as my stepmother. In the meantime,don't taIk about my sex Iife.

Kim Wheeler : You? Have a sex life?

Dorothy Wheeler : Yeah, I do. But I don't charge by the hour Iike you.

Kim Wheeler : How dare you?

Dorothy Wheeler : Oh! Get your hands off me, you maiI-order bride from hell.

Kim goes to grab Dorothy only but is easily sent back and then starts shouting at her in Chinese. Mr Wheeler comes down to calm the situation as Kim sulks to him about being called 'a mail order bride from hell' and is escorted back up the stairs.

The last Kim Wheeler is heard of is when its mentioned that she's being questioned by the police after Campbell is murdered.

Benita Ha also played Brooks a Henchwoman for the villainous organisation 'The Trust'. In 2 episodes of  'Stargate' 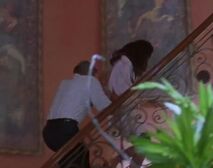 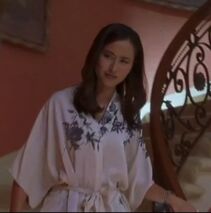 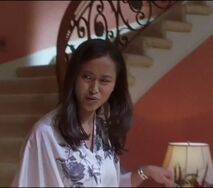 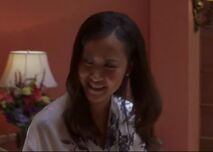 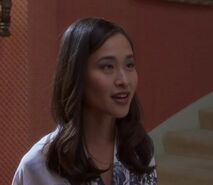 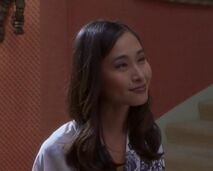 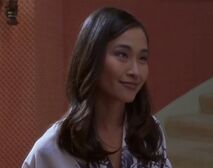 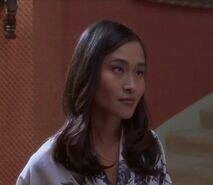 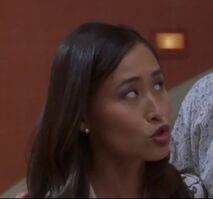 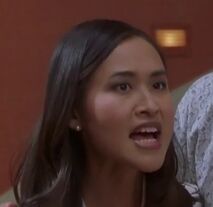 Add a photo to this gallery
Retrieved from "https://femalevillains.fandom.com/wiki/User_blog:Hadouken88/Kim_Wheeler_(Valentine)?oldid=177130"
Community content is available under CC-BY-SA unless otherwise noted.