Cindy Clark (Rebecca Perle) is a villainess who appears in the 1984 vigilante action film "Savage Streets."   Brenda (Linda Blair) is the leader of the high school girl gang "The Satins." Her nemesis is the snobby blonde cheerleader Cindy, who is convinced that Brenda is after her boyfriend Wes. Of course, it's Wes who has the hots for Brenda, but Cindy won't believe it.

These young ladies use some harsh laguage in their verbal spats and get into a hair-pulling brawl in the girls shower. Cindy's underwear going see-through and Brenda's shirt doing the same as they dance around the showers and rush each other.

Brenda and Cindy are standing in the office of Principal Underwood after their brawl. He lets Cindy go with just a warning but he suspends Brenda when she doesn't give in to his advances.

Later in biology class, Cindy makes an insulting remark about Brenda. The girls engage in their second catfight with Brenda emerging victorious. She attacks Cindy and pushes her to the floor of the classroom as a group of students cheer them on. Cindy ends up on her back and Brenda completely tears her shirt off, baring Cindy's breasts. Thoroughly embarrassed by her rival, the half-naked girl stands up and tries desperately to get her shirt back before fleeing the room. 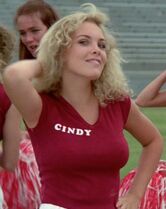 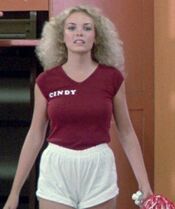 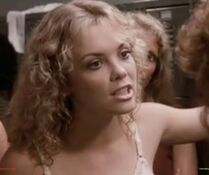 Add a photo to this gallery
Retrieved from "https://femalevillains.fandom.com/wiki/User_blog:Ghost2rite/Cindy_Clark_(Savage_Streets)?oldid=212406"
Community content is available under CC-BY-SA unless otherwise noted.
FandomShop Fandom IG GalaxyQuest