Start a Wiki
Yuki Takeno (Maaya Sakamoto) is the villainess (remorseful) of "The Celebrities' Secret", episode 9.36 and 9.37 of Case Closed (airdates September 3 and 10, 2001). She was a singer turned actress who was formerly in a band with Yoko Okino, Terumi Hoshino, and Kaoru Kusano known as "The Earth Ladies".

The episode had the girls arranging a party for Kaoru, who was set to be married to actor Osamu Kenzaki, with Yoko inviting Kogoro Mouri to attend (along with his daughter Ran and Conan Edogawa) due to Kaoru being a fan of Kogoro's. But  in actuality, Kaoru and Kenzaki's engagement was fake, with Kaoru telling Yuki that it was rumor made up by the press. Unbeknownst to Kaoru, however, Yuki had fallen in love with Kenzaki when they began working together in the TV crime drama he starred in, with Kaoru replacing Yuki's role on the show.

After learning about Kaoru's false engagement to Kenzaki, the jealous Yuki came to believe that Kaoru was pulling a prank on her to hurt her further and plotted to kill Kaoru during her engagement party. Yuki started by sending Kaoru threatening letters and a doll, the latter of which was equipped with a microphone to where Yuki could hear inside Kaoru's bedroom. During the party, when Kaoru went to take a bath, Yuki left the party under the pretense of changing into her old band costume (as part of a surprise for Kaoru) and lured Kaoru out of the bathroom. The evil Yuki then drugged Kaoru before using her sharp thumb nail to cut Kaoru's throat. Yuki wore gloves and a raincoat to keep Kaoru's blood off of her, and later snuck out of the bathroom and threw the gloves and coat out into the hallway; making it appear that Kaoru had been attacked by a stalker who afterwards fled from the apartment.

Yuki also used her teeth to cut her thumb nail down and used her fake nails to cover it up, further covering her tracks as the police believed that Kaoru's assailant had taken their weapon with them when they fled. But ultimately, Conan deduced Yuki's villainous secret when Yuki left the room as Kenzaki and Terumi revealed the true nature of his and Kaoru's "engagement". Conan followed Yuki into the kitchen, where he confronted Yuki with his deductions. Yuki's attempts to claim innocence were foiled when Conan revealed the piece of evidence definitively proving she had attacked Kaoru: the card Yoko had had everyone sign for the engagement party, with the kiss mark Yuki made on the card having a spot of Kaoru's blood on it from where Yuki bit her fingernail off. Yuki finally confessed, revealing how she'd fallen in love with Kenzaki and been driven to murderous jealousy by his false engagement to Kaoru.

Yuki also revealed that she'd been unable to go through with killing Kaoru after seeing the look on her face during the attack, stating that she really was her friend and that she was happy she survived her murder attempt. With that, the shaky and sweating Yuki collapsed, with Conan realizing that she had overdosed on blood sugar medication she had gotten from the hospital (her father having been admitted for diabetes) in an attempt to kill herself out of remorse. Conan was able to save Yuki by feeding her sugar, and she was later hospitalized and visited by Yoko and Kaoru. After Yoko left the room, Kaoru revealed that she'd lied to the police and claimed not to know who attacked her, doing so to protect Yuki and make ammends for lying to her without considering her feelings. She also went on to reveal the true reason for faking her engagement to Kenzaki: to goad Atsushi Makuma (Kaoru's manager) into confessing to being in love with her, with Kaoru's attack prompting him to do so and propose to her. 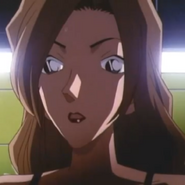 Yuki during her villainous reveal
Add a photo to this gallery
Retrieved from "https://femalevillains.fandom.com/wiki/User_blog:Ezekielfan22/Yuki_Takeno_(Case_Closed)?oldid=106351"
Community content is available under CC-BY-SA unless otherwise noted.