Virginia Purnell is the main villainess of "Lifeless in Seattle", case #51 of Criminal Case: Save the World, the 3rd season of the crime solving game Criminal Case (release date September 29, 2016). She was the mother of journalist Kelly Purnell, who was found stabbed to death on a bus.

While Virginia (who was in Seattle to visit Kelly) appeared heartbroken by her daughter's death, it was later revealed that Virginia was behind Kelly's murder. As revealed in the case's climax, Virginia had grown frustrated with Kelly for cutting off contact from her and her husband Hector after moving to Seattle to pursue journalism, with her feelings become more intense when Hector became sick and eventually died. Kelly's refusal to attend her father's funeral was what eventually drove Virginia over the edge, leading her to kill Kelly on the bus during a confrontation with her, stabbing her in the neck with a pocketknife.

Virginia left the nasal spray she used for her pollen allergy behind on the bus, with her nasal hairs on the bottle being among the evidence proving her guilt in Kelly's murder. After initially denying everything upon being interrogated by the player and Jack Archer, Virginia broke down and confessed, proclaiming that Kelly was no longer the daughter she raised. But after being reminded by Jack that she had in fact killed her daughter, Virginia broke down in tears as she bemoaned the crime she had committed. During her trial, Virginia pleaded guilty and told judge Nigel Adaku that she would accept the sentence he gave to her. After factoring Virginia's age and the possibility that she was suffering from dementia, Adaku sentenced that Virginia spend the rest of her years in a high security medical institution. 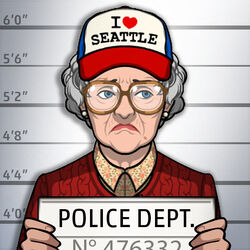 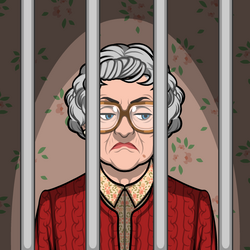 Add a photo to this gallery
Retrieved from "https://femalevillains.fandom.com/wiki/User_blog:Ezekielfan22/Virginia_Purnell_(Criminal_Case)?oldid=145522"
Community content is available under CC-BY-SA unless otherwise noted.
FandomShop Fandom IG GalaxyQuest