Victoria Chase (Dani Knights) was a minor villainess of the decision based drama video game Life Is Strange. She was a student at Blackwell Academy, a prestigious art college in Oregon. The daughter of wealthy art gallery owners, Victoria was a spoiled and vain bully whose biggest target appeared to be Max Caulfield (the game's protagonist). She was also a prominent member of the Vortex Club, Blackwell's elitist club seemingly reserved for "popular" students. She had two friends/cronies in Taylor and Courtney and was very close to Nathan Prescott, a mentally unstable student and fellow Vortex Club member. Taylor described their relationship as of the "brother-sister" variety. Victoria also harbored a thinly veiled crush on her photography professor Mark Jefferson, despite his repeated rejections to her advances.

Victoria's first prominent scene was when she correctly answers a question in Jefferson's class that Max would fail to answer, throwing in a hurtful remark along with it. When Max rewound time and answered correctly, Victoria glared at her angrily. She later confronted Max at the entrance to their dorm, mocking her for her answer among other derogatory name calling before disallowing her access to the dorm by blocking the entrance (Taylor and Courtney alongside her). She also takes an unflattering photo of Max and announces how she would post it online. Max would retaliate by setting Victoria up to get paint poured on her, upsetting her due to her wearing a new cashmere sweater and causing her to bark at Courtney and Taylor to get her towels.

When Max approaches Victoria after this, the player's choice affects how she acts. If you choose to comfort her, Victoria would soften up as Max compliments her and her photography, returning the favor by deleting the photo and apologizing before stepping aside to let her into the dorm. If you choose to mock her by taking a photo, she would look upset before stepping aside along with a threat. Later on, Max would learn that Victoria lied to student Juliet Watson that Max's friend Dana had sexted her boyfriend Zachary (when in actuality, she had done so). The last few shots of the episode show Victoria throwing aside a Missing Persons flyer for Rachel Amber, whom she had disdain for due to allegations that she had sex with Mark Jefferson.

Victoria's first appearance in this episode reveals that she has Courtney (and possibly Taylor) do her homework for her. While Max is showering later, she would witness Victoria and Taylor harass Christian student Kate Marsh for a viral video Victoria posted of Kate making out with several people at a Vortex Club party. Victoria comments that Kate "set a new tongue record on video" before Kate ran out in despair, Victoria calling her a "viral slut" as she does. Depending on your choice in Episode 1 regarding Victoria, she would then either complain about Taylor and Courtney taking so long to get her towels (if you chose Comfort) or admonish Max for taking the picture (if you chose Make Fun Of). She would then leave the link to Kate's video on a mirror before leaving. When Max returns to her trashed room after this, Victoria will have left a mean message on her mirror if you chose to mock her for the paint incident.

In class, when Max goes to her desk and finds Victoria and Nathan sitting, Victoria would be snide and rude to Max regardless of your previous choices (though she is notably less venomous if you decided to try to appease her). Later when Kate was up on the roof threatening suicide, Victoria can be seen recording the ordeal on her phone, but is shown crying in guilt later on (regardless on whether or not Kate's suicide was successful).

This episode is when Victoria's softer side began to come forth, as she would send an email to Taylor regarding her guilt in causing Kate's suicide/suicide attempt and sneak out of the dormitory to unwind. When Max snuck out with her friend Chloe Price (another protagonist), the two would see Victoria interacting with Mark Jefferson, obviously trying to seduce him into picking her photo for an Everyday Heroes photo contest that was going on so the two could to go San Francisco together. When she fails to do so, she expresses embarrassment and frustration with herself before departing. If you chose to blame Jefferson for Kate's suicide attempt to the Principal and it resulted in him being removed from judge on the contest, she would send Max an angry message saying that she thought Max was ready for the Vortex Club, but now was sure she wasn't and that she would make sure everyone knew "the truth" about her.

In the alternate timeline, where Max rescues Chloe's father from dying, she is shown to be in the Vortex Club and apparent best friends with Victoria, as evidenced by her attitude with Max during her first moments in the timeline and the texts between them that can be viewed on Max's phone.

After discovering that Victoria is the next target of the person who drugged and took photos of Kate, Max can talk to Victoria at the Vortex Club party to warn her about this. Victoria is initially rude to Max and tries to get her booted out of the VIP lounge (Max having either sneaked in or been invited in by Courtney). Victoria's fate depends heavily on your past choices, current conversation choices, and your decision on whether or not to warn Victoria at all. If you appease Victoria, you can learn that she felt that she HAD to be callous and vicious in order to succeed in the art world, a point that Max would strongly deny is true. Victoria would also reveal that she felt she always had to overcompensate, despite not understanding why. If all things go well, Victoria would even invite Max to join the Vortex Club, though Max would deny and prompt Victoria to ask why she looked so serious. This would trigger the prompt on deciding whether or not to warn Victoria about the Dark Room she and Chloe had discovered.

If you are unable to convince Victoria about the danger awaiting her, she would coldly mock Max before telling her to leave her alone. If you are able to convince Victoria of the truth, she would bring up your past choice of comforting her after the paint incident while also revealing that she actually liked Max and was envious of how she didn't care about what others thought. She would also admit to being afraid of Nathan's outbursts before promising to be careful (Max believing Nathan to be the true villain of the game). Victoria would then tell Max to text her if she needed any help. After that, Victoria would be revealed as the winner of the Everyday Heroes contest, dedicating her win to Kate Marsh (the validity of this is uncertain regardless).

In the final episode, if you were able to successfully warn Victoria in the previous episode, she would end up being kidnapped along with Max by Jefferson (the true main villain of the game) and tied up in the dark room. Regardless of your previous choices, she would beg for forgiveness from Max and plea that she didn't want to die at only 18 years old. She would later be shown drugged and on the couch when Mark is taking photos of Max. Eventually, Mark would kill her due to not being interested in having her as a "subject". But if you failed to convince Victoria, she would not appear in the Dark Room and would presumably be safe from Mark.

After returning back to the first day of the game's timeline to save Chloe from being murdered by Jefferson, Max would confront Victoria about her bullying ways. Depending on your choices, Max would either be insulting toward Victoria or generous toward her, saying that she knew she had a good heart and was capable of doing good things. Depending on your final decision on whether to sacrifice Chloe or Arcadia Bay, Victoria would either be presumably killed during the tornado or be present for Chloe Price's funeral along with several other characters.

Life Is Strange: Before The Storm

Victoria Chase additionally appeared in the 2017 prequel game Life Is Strange: Before The Storm. Her first onscreen appearance has her approach Chloe Price (the game's main protagonist), calling her "Kari" and goading her for details about how she'd spent the night at a Firewalk concert with Rachel Amber. Chloe, realizing that Victoria was jealous of Rachel, teased her for this and (depending on the player's choice) can purposefully give her the wrong answers for her chemistry homework. If the player chooses to sabotage Victoria, she will later angrily text Chloe for what she'd done.

The game also shows in further detail Victoria's disdain for Rachel Amber, as shown by a note she scribbled on a drama club scenery piece implying that Rachel got the lead in Blackwell's production of "The Tempest" by sleeping with drama teacher Mr. Keaton. In the event that Chloe stopped Rachel from being kicked off the play after they were caught ditching school, Victoria can be caught by Chloe attempting to drug Rachel with muscle relaxers (planting them in a cup of tea). In most scenarios, Chloe will expose Victoria's trick to Rachel and will instead either be given the drugged tea without her knowledge or be forced to drink some of it to prove her "innocence", later causing her to pass out. She will also angrily text Chloe about this and post a photo of Chloe's act of vandalism in the school bathroom following her expulsion (or suspension, depending on player choice) while voicing her disdain for Chloe.

In other scenarios, where Victoria is given Rachel's role as a result of Rachel being kicked off the play, Chloe can catch Victoria anxiously taking the muscle relaxants, fearing that she'll mess up the play. Once she is joined by Chloe and Rachel (the latter of whom wishes Victoria good luck in her performance), Chloe can either encourage Victoria as well (giving Rachel the opportunity to drug her tea), or she can taunt Victoria into dropping out of the play. If the player chooses the latter, Victoria will admit that she hadn't learned her lines and hadn't wanted to do the play anyways and quit, later lambasting Mr. Keaton for being "unprofessional" when the forest fire delayed Juliet Watson from arriving for the play. Victoria's final scene in the game showed her smiling as she watched fellow student Evan Harris taking photos, most likely sparking her later interest in photography. 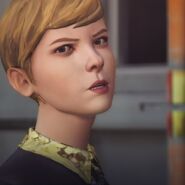 Victoria glares at Max during class 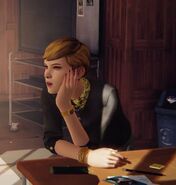 Victoria when Max interrupts her conversation with Mark Jefferson

Victoria after the paint prank

Victoria after the paint prank if you decide to comfort her

Victoria after failing to seduce Jefferson

Victoria Chase in an alternate timeline
Add a photo to this gallery
Retrieved from "https://femalevillains.fandom.com/wiki/User_blog:Ezekielfan22/Victoria_Chase_(Life_Is_Strange)?oldid=80383"
Community content is available under CC-BY-SA unless otherwise noted.