Start a Wiki
Susie Nottingham is the villainess of "Electrical Hazard", case #17 of Criminal Case: Mysteries of the Past, the 4th season of the crime solving game Criminal Case (release date March 16, 2017). She was a waitress and the daughter of Arnold Nottingham, a prominent Luddite and protestor of Concordia's World Exhibition.

Ultimately, the player and Maddie O'Malley discovered that not only was Susie's lover inventor and Concordian Flying Squad member Charles Dupont, but she was also the one responsible for her father's death. When confronted with the evidence, Susie initially feigned innocence before snapping at Maddie's claim that she stole the electric gun used to kill Arnold, revealing that she'd made it herself. After that, Susie fully confessed to killing her father, revealing how she had been learning to become an inventor behind her father's back and how they'd gotten into an argument when he caught her leaving the Inventors' Hall following her rendezvous with Charles. During the fight, Susie attacked Arnold with the electric gun, killing him. Horrified by her actions, Susie fled the scene and later wrote a telegram to the police anonymously confessing to the murder, doing so out of remorse for killing her father (though she ultimately never sent the message).

During her confession, Susie tearfully expressed the guilt she felt over her actions, while also revealing that Arnold wasn't behind the recent string of invention vandalisms and that she'd decided against turning herself into the police after realizing that Charles would become a suspect. Susie was arrested and put on trial, where judge Satoshi Takakura sentenced her to seven years in prison. Following her sentencing, Susie broke down in tears as she proclaimed that she would never recover from the guilt of killing her father. 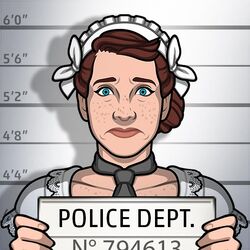 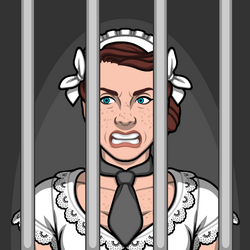 Add a photo to this gallery
Retrieved from "https://femalevillains.fandom.com/wiki/User_blog:Ezekielfan22/Susie_Nottingham_(Criminal_Case)?oldid=144727"
Community content is available under CC-BY-SA unless otherwise noted.