Start a Wiki
Sister Olivia aka Angie Delmarco (Susan Misner) is a hidden (remorseful) villainess from "Acts of Contrition", episode 5.05 of Law & Order: Criminal Intent (airdate October 23, 2005). She was a nun at an inner city church, which often provided shelter to prostitutes after buying them from their pimps. Olivia was shown buying a pair of girls from a pimp in the episode's beginning, and was also shown to be protective of schizophrenic homeless man Mickey, who hung around the church as part of his delusional effort to protect the girls.

Olivia's backstory revealed that she was born as Angie Delmarco and, in 1988, was involved in a vicious racial attack against James "Jimmy" Jones, a high school classmate of hers at Filmore High and a gifted football player. Jimmy was attacked at a baseball field by Al Nero and Tony Zavaglia, as Jimmy had been dating Al's ex-girlfriend Lisa. Angie was Al's new girlfriend at the time, and her role in the assault had her luring Jimmy to the ballfield under the false pretense of Lisa wanting to get off work early to go out dancing with him. During the assault, Jimmy begged Angie for his help, only for the villainess to viciously reject his pleas by throwing a racial slur at him before kicking him in the face. The attack left Jimmy paralyzed with heavy brain damage, with Jimmy's half brother Eddie Roberts taking care of him in adulthood after their mother died. Later in life, Angie became racked with guilt over her role in the attack, becoming a nun and devoting herself to the church's work as repentence for her actions.

The episode's events had Eddie (now a doctor) attempting to locate Olivia after her stepfather gave him a letter Olivia's mentor, Sister Dorothy, sent to him, wanting her to be held accountable for her actions. After tracking Olivia down to her church, Eddie began paying Mickey to spy on the church and tried to get Dorothy to show him where Olivia was, killing her when she refused. Eddie also painted the Saturn symbols Mickey drew to protect the church's occupants at the scene to frame Mickey, with Olivia using candle wax to cover them up. Detectives Robert Goren and Alexandra Eames uncovered the symbols and learned they weren't drawn by Mickey, with Olivia confessing to covering them up in an effort to protect Mickey.

As the detectives continued to dig into the motivation behind Dorothy's murder, piecing together Olivia's connection, she was shown going to confessional with priest Father Manning, revealing that she prayed that God gave her the strength to face what might come in reference to the possibility of her dark past being exposed. Ultimately, the detectives uncovered Jimmy's assault and Olivia's true identity and involvement in the attack, along with how Eddie had killed Dorothy in his pursuit of her. After learning that Jimmy's injuries prevented his body from fighting infection and that he would ultimately die as a result of his beating, the detectives and ADA Ron Carver agreed to get Olivia/Angie on the record for the assault in exchange for Eddie accepting a plea deal.

Eddie also revealed to Goren how Jimmy had been dressed to go out dancing on the night of his assault, and the later revelation that Lisa was working on that night revealed how Olivia had lured Jimmy to his attack. Goren and Eames revealed what they had uncovered about Olivia's past to her at her church, who initially tried to deny everything before confessing upon being given the note Dorothy had sent to her mother (having had no knowledge of her doing that). After being assured that her mother died in peace knowing her daughter was doing good to make up for her past, Olivia told Carver about her actions, revealing in detail the assault on Jimmy at the hands of Al and Tony and how she had lied to Jimmy to lure him there. Olivia then tearfully revealed that she'd went along with the attack in the hopes of making Al like her and denounced herself as an evil person back then. After revealing how she'd rejected Jimmy's plea for help, Olivia begged for forgiveness and then apologized to Dorothy at the alter, proclaiming that she should've let Eddie find her and that she should've died instead of her.

After apologizing to Father Manning, Olivia agreed to make a statement to her actions to the police in writing and video, accepting of the fact that she could possibly face murder charges when Jimmy ultimately died of his injuries. Olivia assured the detectives she was going to face what she'd done before going with Manning to prepare her girls for her future arrest, with Carver stating that Olivia would likely having enough time to set up new provisions for the girls in her care. 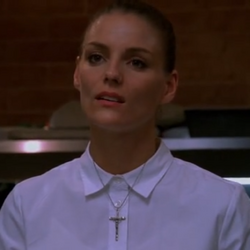 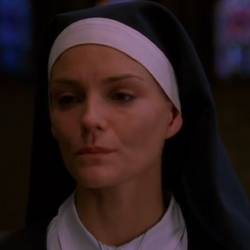 Add a photo to this gallery
Retrieved from "https://femalevillains.fandom.com/wiki/User_blog:Ezekielfan22/Sister_Olivia_(Law_%26_Order:_Criminal_Intent)?oldid=197721"
Community content is available under CC-BY-SA unless otherwise noted.