Start a Wiki
Saori Ayukawa (Yamauchi "Sayuri" Sayuri) is the villainess of "The Fishing Tournament Tragedy", the 2-part Season 12 finale of Case Closed (airdates February 23 and March 1, 2004). She was introduced as a competitor in a fishing tournament, which was being sponsored by Sonoko Suzuki's father's company.

Saori's backstory revealed that she was the girlfriend of fisherman Kensuke Kanie, who she got into an argument with regarding her not wanting to get married, to which Kensuke accused her of being in love with her friend and fellow fisherman, Takuya Masubuchi. The altercation ended in Saori accidentally shoving Kensuke off the cliff onto a passing train, killing him. The fatal argument was witnessed by freelance writer/photographer Toshihiko Funaki, who began blackmailing Saori with the knowledge of her actions, forcing her to help him financially under the threat of exposing her secret if she refused.

Prior to the episode's events, Saori received a contract from Pacific Sports and began making more money, to which Tosihiko demanded that Saori give him ¥10 million. Finally driven to her limit, Saori began plotting to kill Tosihiko to end his blackmail, with her plot occuring during the fishing tournament. After learning that Tosihiko was planning to take photographs of the passing express train from a spot under the bridge well known for giving a good view of the tracks, Saori set up a trap to kill Tosihiko in a similar way to how Kensuke died. After placing a wooden board with a rock on it on top of the bridge, which also had her handkerchief tied to it, the evil Saori waited until the train was about to pass before using her fishing pole to pull the board down, with the rock striking Tosihiko on the head and presumably killing him. Tosihiko's body also fell onto the train and set his body to the same location where Kensuke's body was found, leading the investigating police to believe he'd been killed there.

While Saori's plan initially allowed her to avoid suspicions, Conan Edogawa was able to deduce how she'd committed the murder, knocking out Sonoko to make the summation to everyone. The biggest piece of evidence proving Saori's guilt was her handkerchief, which Ayumi Yoshida had identified as Saori's from when she used it to clean Ayumi's scrapped knee. Cornered, Saori confessed to everything, including how she'd accidentally killed Kensuke in the past and had been blackmailed by Tosihiko ever since. Saori revealed that she'd killed Tosihiko due to her anger at the prospect of being blackmailed for the rest of her life, as well as showing regret over her role in Kensuke's death and for disrupting the fishing tournament. Following her confession, Saori was arrested by Jugo Yokomizo, much to the shock and dismay of Takuya. 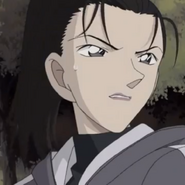 Saori as she prepares to kill Tosihiko 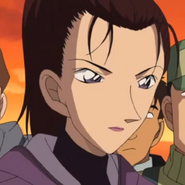 Saori during her villainous reveal
Add a photo to this gallery
Retrieved from "https://femalevillains.fandom.com/wiki/User_blog:Ezekielfan22/Saori_Ayukawa_(Case_Closed)?oldid=168727"
Community content is available under CC-BY-SA unless otherwise noted.