Sandra Hwang was a hidden recurring villainess from Criminal Case: Mysteries of the Past. She was the Deputy Mayor of Concordia and the wife of Steven Hwang. She appeared within four murder investigations before being revealed as a villainess in case #42, "The Heart of the Matter" (release date September 6, 2017).

The case opened with Sandra being found murdered in her home, strangled to death and with her heart cut from her body. It was revealed that Sandra had attended a masked ball at the Douphol Mansion. In addition to creating conflict with party organizer Elisa Melody, Sandra's political ambitions were also causing a strain in her marriage to Steven.

Ultimately, however, Sandra's killer was revealed to be Larry Rochester. After being confronted with the evidence to his guilt by the player and Isaac Bontemps, Larry confessed and posthumously revealed Sandra as a corrupt villainess. As Larry detailed, Sandra had been colluding with the Rochester family, distracting officials and keeping them from uncovering the family's illegal activities in exchange for Horatio Rochester (Larry's uncle) aiding Sandra's mayoral campaign.

But prior to the case's events, Sandra confronted Larry when his father Leopold was arrested for supposedly operating the Concordia Telephone Company, which was actually a front used for a scam to swindle Concordian citizens. Having learned that Larry was the true mastermind behind the company and had allowed his father to take the blame for him, Sandra threatened to turn Larry into the police, unable to see Leopold be arrested for a crime he didn't commit. Not wanting Sandra to follow through with her plan, Larry strangled Sandra with a rope before carving out her heart as a means of delaying the police investigation. 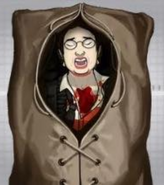