Renge Kataoka (Naoko Takano) is the remorseful and redeemed villainess of "The Simultaneous Stage Advance and Kidnapping", episodes 14.20 and 14.21 of Case Closed (airdates August 8 and 15, 2005). She is the 17-year-old daughter of wealthy businessman Hanshiro Kataoka, and had been asked for her hand in marriage by three CEOs that Hanshiro worked with.

Renge, however, was against having an arranged marriage and ran away from home half a year prior to the episode's events, later becoming a member of the Tamanosuke theater troupe and growing close to its' leader, Tamanosuke Ito. The episode's events have Renge and her theater troupe preparing for a performance of "The Legend of the Bamboo Cutter", with Renge cast as the lead heroine, Princess Kaguya.

However, three days before the performance, Hanshiro tracked Renge down with the help of his secretary, Soichi Onuki, and ordered her to come home with him, with Tamanosuke telling Renge to settle things with her father and return for the play. Later on, though, Renge turned heel by conspiring with Soichi in another plan to avoid arranged marriage: faking her own kidnapping and having her father and the three CEOs that proposed to her pay for the ransom, doing so to mirror the play and show her father how she felt. To send the ransom demand, Renge bound and gagged herself and had Soichi record video of her, with the ransom demand being for ¥1,500,000. While the kidnapping was initially believed to be genuine, Conan Edogawa was able to deduce that the kidnapping was staged by Renge when he saw that the video was edited and that Renge got cobwebs stuck in her hair after untying herself and getting up to close the curtains of a nearby window.

Tamanosuke recognized the building Renge was in as a building the troupe had rented out to store props and costumes, but upon going there with Conan and Ran Mouri, they were shocked to find Renge was nowhere to be found and that there was blood on the floor. This served as the reveal that Soichi had double crossed Renge, attacking her and placing her bound and gagged in a sewer tunnel to drown when the water rose high enough. After Soichi was exposed as Renge's co-conspirator and abductor and Renge was rescued by Conan and his friends, Renge went to the play (where Ran was taking over Renge's role), expressing remorse for all the trouble she caused and showing hesistance to taking back her role for the finale. But after receiving encouragement from Ran, Renge took her role for the finale, receiving immense praise from the audience. Conan also revealed that Renge returned home and that her father allowed her to remain in the theater troupe, and also implied that Renge started a relationship with Tamanosuke as they started touring around the world with the troupe.

Renge bound and gagged during her "kidnapping" 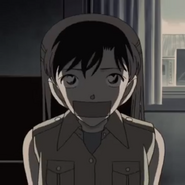 Renge during her villainous reveal 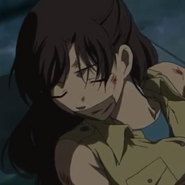 Renge after being double crossed by Soichi
Add a photo to this gallery
Retrieved from "https://femalevillains.fandom.com/wiki/User_blog:Ezekielfan22/Renge_Kataoka_(Case_Closed)?oldid=138029"
Community content is available under CC-BY-SA unless otherwise noted.
FandomShop DC Trivia GalaxyQuest