Queen Tambria (Olivia d'Abo) is the main villainess of the 2014 film Sleeping Beauty. She was the evil queen of a kingdom that was destroyed by the kingdom of Olivetta, leaving her angry and wrathful against Olivetta's King and Queen, David and Violet, in spite of them giving her a home in their kingdom.

The film opened with the King and Queen announcing the birth of their newborn daughter Princess Dawn, with three enchantresses bestowing gifts upon the infant before Tambria suddenly appeared, expressing irritation at having not been invited. David and Violet attempted to appease Tambria by saying they had sent invitations out to all of Olivetta, with Tambria voicing her outrage at them for destroying her kingdom before asking to bestow a gift onto Dawn.

At that, Tambria placed a curse on Dawn that, on her 16th birthday, she would prick her finger on a spindle and die, doing so to take her revenge on David and Violet. One of the enchantresses quickly undid Tambria's spell by changing it to where Dawn and the rest of the kingdom would merely fall into permanent slumber until true love's kiss awoke Dawn, with Tambria boasting that she would use the slumber to conquer the kingdom. Tambria also went about killing the enchantresses with her powers, but not before they swore Tambria would pay for her betrayal, with the villainess vanishing before the king's knights could kill her. Years later, when Dawn's 16th birthday arrived and the curse had not been enacted, the King and Queen held a celebration in which their bread deliverer (who Dawn had developed a crush for) presented Dawn with a blanket, which he'd made with a spindle, which he warned Dawn not to touch.

Dawn insisted to the boy that the curse was over and took hold of the spindle, which pricked her finger. Suddenly, Dawn began to fall into a deep sleep as the boy transformed into his true form: Tambria, who had used her powers to romance Dawn into trusting her and alter time to make it appear it were Dawn's 16th birthday early. As the rest of the kingdom began to fall into slumber, the evil Tambria dragged the sleeping Dawn over to the king and queen to boast of her successful curse, proclaiming she would rule over their kingdom during the slumber for years. However, Tambria's attempt to kill the King failed due to the enchantress' counter spell protecting the sleeping kingdom, leading Tambria to take over the castle and use her powers to kill those coming to free the castle from the curse, including (among other things) a dragon creature she kept in the moat around the kingdom.

The film's main events have the spoiled Prince Jayson going to Olivetta with the intent of taking over the kingdom as his own, bringing along several of his men, including his whipping boy (and the film's main protagonist) Barrow. Soon after making their way to the kingdom, Tambria discovered their presence and began using her powers to stop them, starting by having deceased members of the King and Queen's family rise from the dead to attack them. After the men managed to defeat Tambria's undead army, Tambria sent another one of her monsterous creatures to attack the men in a room filled with treasures, with the creature abducting Jayson and taking him to Tambria.

With Jayson in her clutches, Tambria gagged and bound the prince to the king's throne, crowning him and preparing a dinner "in his honor". Tambria also revealed that she knew his great-grandfather, him having turned her away after her kingdom's destruction, detailing how both her husband and children had been murdered during the destruction. Tambria also contemplating sending Jayson's father his son's head on a stick, remaining unmoved when a desperate Jayson apologized to Tambria for what his father did and claiming he was nothing like him or his great-grandfather. The film's climax had Barrow and Gruner (the only survivor of Jayson's men) burning several of Tambria's undead minions to death in a ploy to distract her while they freed the Prince, only to be stopped by another pair of her minions before being confronted by the villainous witch, boasting that she had an untold number of minions at her disposal.

After tying up Barrow and Gruner, Tambria boasted that she intended to use her undead minions to rule over all three kingdoms, rejecting Barrow's pleas to release Dawn before it was revealed that the power-hungry Jayson had aligned with Tambria to rule over the kingdoms with her, with Tambria later asking Jayson as they went to kill Dawn to decide on which of his friends he would kill first to prove his loyalty to her. Jayson later revealed to Barrow as the two engaged in a sword fight that he feigned alignment with Tambria under threat of her killing him, and went to kill Tambria and free Dawn from the sleeping curse. When Tambria challenged Jayson to kill Dawn to prove his loyalty to her, only for Jayson to instead try to kiss Dawn and break the spell. However, when Jayson's kiss failed to wake Dawn, Tambria gloated to Jayson before stabbing him with a dagger as he attempted to strike her with his sword, killing him before sending her minion to bring her Gruner.

Once Gruner was brought to Dawn's room, Tambria promised him control of the kingdom if he killed Dawn, strangling him and threatening to rip his head off if he didn't do as she wanted. While it initially appeared Gruner was going through with Tambria's order, he instead carried Dawn to a chair before killing Tambria's undead minion with a stab of his sword, after which the villainess went through on her promise and ripped Gruner's head off. It was then that Barrow (having been led to the room by young castle dweller Newt) warned Tambria at swordpoint to stay away from Dawn, with Tambria boasting that Barrow couldn't stop her before using her powers to bring several of her vanquished minions, as well as the dead allies Jayson brought to the castle, back from the dead and surround Barrow.

Barrow's attempt to talk through to the undead Jayson led Tambria to rip out the Prince's heart in response to Barrow saying he had good in his heart, feeding it to him and the other undead men before ordering them to kill Barrow. After seeing Dawn missing from the chair (having been dragged from the room by Newt), Tambria went after her, catching them outside the castle right as Barrow confronted her. After the Queen's attempts to stop Barrow with her minions failed, Tambria appeared to surrender and step aside to allow Barrow to awaken Dawn, only to reveal her surrender was an act when she attacked and seemingly killed Barrow, much to Newt's dismay. After Tambria claimed to Newt that she hadn't been lying when she said true love conquers all, the maniacal villainess began using her powers to bring her army of minions back to life, commanding them to serve her and take out her vengeance. But when Barrow came back to life, he instead went to Dawn and kissed her, awakening the princess and undoing Tambria's spells.

Tambria screamed in dismay at her spells being broken, but upon seeing Dawn awake and standing, she produced a knife and prepared to kill Dawn again, only to be stopped when Barrow stood and stopped her with his sword. Barrow and Dawn proceeded to banish Tambria from the kingdom, and when Tambria angrily protested, Barrow responded by stabbing her with his sword, which appeared to kill her. However, the film ended with an unseen figure wearing clothing similar to Tambria's arrive at the party announcing the birth of Dawn and Barrow's daughter Day asking to bestow a gift on the child, possibly indicating Tambria had returned. 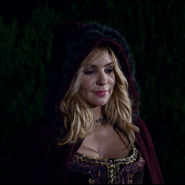 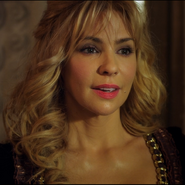 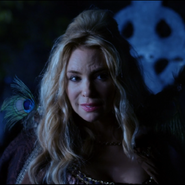 Add a photo to this gallery
Retrieved from "https://femalevillains.fandom.com/wiki/User_blog:Ezekielfan22/Queen_Tambria_(Sleeping_Beauty)?oldid=169688"
Community content is available under CC-BY-SA unless otherwise noted.
FandomShop Newsletter Join Fan Lab