The unnamed Popular Cheerleader (Taylor Swift) is the villainess from Taylor Swift's music video for You Belong With Me (released on June 16, 2009). The video had Taylor Swift appearing in a dual role as the villainous cheerleader and as the video's main protagonist (credited as "Studious Bandmember").

The cheerleader was introduced as the girlfriend to the band member's next door neighbor (and crush), first appearing outside his house to pick him up. As the boy entered her car, the brunette gave her boyfriend a passionate kiss and glared at his neighbor, possibly due to picking up on her affection for him.

Later on, the cheerleader was shown with her squad at a football game, which her boyfriend wins for his team. But later on, the boy angrily confronted her when he caught the villainous girl flirting with another player, leading to an argument in which the boy stormed away, much to his secret admirer's dismay.

In the video's climax, the band member surprised her neighbor by arriving at their school dance in a white dress. As he approached her, however, the brunette tried to stop him and give him a kiss. As she also took notice of her romantic rival's stunning appearance, her boyfriend walked over to her and gave her a kiss, much to her outrage. 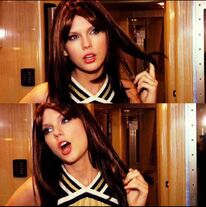 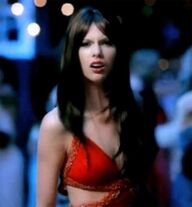 Retrieved from "https://femalevillains.fandom.com/wiki/User_blog:Ezekielfan22/Popular_Cheerleader_(You_Belong_With_Me)?oldid=168404"
Community content is available under CC-BY-SA unless otherwise noted.