Start a Wiki
Natalia Petrovic aka Angie Anderson (Lauren German) is the villainess (redeemed) of "Kill Bob", episode 2.11 of Fox's Human Target (airdate January 31, 2011). She was a schoolteacher and the wife of software designer Bob Anderson, who hired the services of Christopher Chance after someone on a motorcycle tried to shoot him as he was stuck in traffic.

Angie's backstory, however, revealed that her true identity was Natalia Petrovic, a member of the Russian intelligence branch known as the OSA. Natalia was also revealed as a skilled spy and assassin, who had been assigned to romance Bob as a means of killing him and retrieving an encryption code he was working on that was being used to protect NSA satellites.

Natalia was officially revealed as Bob's attempted killer when Chance and his team tailed Bob and "Angie" to a farmer's market, where a man swapped Natalia's bag for a duplicate bag with a gun in it when Natalia placed hers on the ground. Bob was taken from the market by Guerrero before Natalia could harm him, with Chance later accompanying the couple as they went to their mountain cabin to provide protection to Bob from Natalia. While she initially refused Bob's request to let Chance stay with them (under the claim that his car broke down on his way to the nearby ski resort), Natalia ultimately agreed to let Chance stay after getting a call from her boss Ivan, revealing that she was suspicious of Chance and was seemingly planning to kill him as well as Bob to cover her tracks.

During dinner with Bob, Chance and Natalia both took opportunities to hide knives under the table and pull out their guns, which they pulled out on each other after Chance sent Bob to get firewood. After realizing that their guns were both empty from when they each unloaded the other's weapon, Chance and Natalia engaged in a physical brawl, with Chance fleeing with Bob when he returned as Natalia followed suit and opened fire on them. It was then that Ivan arrived at the cabin, wanting to make sure Natalia went through with killing Bob, and it was then that Chance began to realize Natalia's true end game: she was only trying to make it look like she was trying to kill Bob, as shown by her shooting a bag of explosives in her and Bob's car with a sniper rifle, making it appear that she had killed both Chance and Bob.

After uncovering Natalia's true identity and intentions, Chance had Bob set up a meeting with Ivan and Natalia to give up the drive with the encryption code they wanted. The meeting ended with Natalia pulling out a pistol and remorsefully shooting Bob in the shoulder, though this was later shown to be another ploy when Chance saw it was a clean shot that wouldn't kill Bob. As Guerrero tended to Bob, Chance and Laverne Winston pursued Natalia and Ivan, with Chance getting into a shootout with Natalia as the pairs drove toward each other. But as the two approached, Natalia took her finger off the trigger, allowing Chance to shoot her (non-fatally) in the shoulder. Natalia and Bob were reunited and taken back to the team's headquarters, where Natalia marvelled at Bob revealing that he'd given Ivan a drive containing a virus that would corrupt the code he was after and revealing the reason for her face turn: she had come to genuinely fall in love with Bob. After thanking the team for their help, Natalia and Bob were given new identities by Guerrero, with the episode ending with the couple leaving on a boat with their new passports. 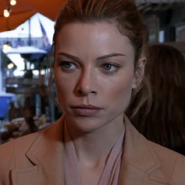 Natalia after her villainous reveal 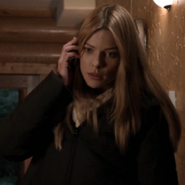 Natalia on the phone with Ivan 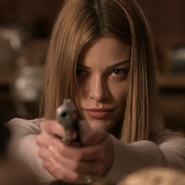 Natalia armed with a sniper rifle

Natalia during her shootout with Chance
Add a photo to this gallery
Retrieved from "https://femalevillains.fandom.com/wiki/User_blog:Ezekielfan22/Natalia_Petrovic_(Human_Target)?oldid=123053"
Community content is available under CC-BY-SA unless otherwise noted.