Start a Wiki
Nancy Claus (Carol Kane) is the hidden (later redeemed) villainess of "Billy & Mandy Save Christmas", the Season 5 finale of The Grim Adventures of Billy & Mandy (airdate December 2, 2005).

Nancy was the wife of the famous Santa Claus, but was also revealed to have been a vampire for years prior to meeting Santa. Nancy was also revealed to be a head-head vampire, ruling over all the head vampires of the world. Despite knowing about Nancy being a vampire, Santa romanced and married Nancy, who was drawn to Santa's habit of giving gifts to complete strangers and was inspired by him to begin working at a blood bank.

Santa's gift giving habit led the couple to begin the tradition of giving gifts to all the world's children at Christmas, initially agreeing to split the work required to do so between each other. But as the years passed, Santa began becoming more and more preoccupied with checking his Naughty or Nice list, leaving Nancy to do the rest of the work. Finally fed up with the work, Nancy attacked Santa and turned him into a vampire, with the nefarious act being shown in the episode's opening.

The film's events have Grim, Billy, and Mandy (the series' three main protagonists) travelling to the North Pole to prove to Mandy that Santa Claus was real, with Grim being surprised to find the area empty and Santa's house in disrepair. It was upon going inside the house that Nancy and Santa's elves came out of hiding and Nancy came to Grim (who knew the Clauses) for comfort, showing him how Santa was now a vampire that they were forced to keep chained inside a coffin in the cellar where they stored defective toys. Nancy also claimed that she had no idea how Santa was turned into a vampire and appeared heartbroken by her husband's fate. After sending Grim and Mandy to speak with head vampire Baron Von Ghoulish on how to save Santa, Nancy was comforted by Billy, with Nancy becoming touched by Billy's offer to help her.

Upon confronting Ghoulish, however, Grim and Mandy learned that to free Santa, they would have to kill the head-head vampire, leading the trio to head back to Santa's house. Meanwhile, Billy was assisting Nancy and the elves in preparing for Christmas, though he dismissed Nancy's praise due to being crestfallen by Santa's fate. In response, Nancy consoled Billy and thanked him for being the first person to offer her help or show her any goodwill. Nancy also hinted at her true nature by telling Billy he would always have a place in her heart and in "the new world order"; indicating that she intended to take over Santa's place now that he was a vampire.

Mandy arrived back at the house with Grim and Ghoulish soon afterwards, telling Nancy how they would have to kill the head-head vampire to save her husband. In response, Nancy encouraged the trio to ask Santa what he'd seen before his transformation, taking Grim's scythe from him before he went downstairs under the pretense of cleaning it. Unbeknownst to the three, however, the evil Nancy had already freed her vampire husband from his shackles, locking them in the cellar in the hopes of Santa killing them. As Billy questioned what was happening to his friends and Ghoulish, Nancy claimed they were being punished by Santa for being "naughty", assuaging Billy's concerns.

As Grim, Mandy, and Ghoulish were cornered by Santa, Ghoulish finally remembered that Nancy was the true head-head vampire, with Mandy chiding him for not remebering that earlier. After Mandy managed to briefly subdue Santa and Grim retrieved his scythe by whistling to it, the trio escaped the cellar and confronted Nancy, who transformed into her monsterous form as she admitted to being the head-head vampire. Nancy also blasted Ghoulish, revealing that she had sent Grim and Mandy to him so he would destroy them, with Ghoulish arguing that he no longer destroyed people since it was "too messy". In response to Mandy's belief that she had to hate her husband to turn him into a vampire, Nancy professed that she loved him, detailing how they met and fell in love and how she became frustrated at Santa leaving her to do all the work.

While Mandy and Grim expressed a belief that Nancy had turned Santa into a vampire so he would turn the rest of the world into vampires and destroy Christmas permanently, Nancy instead revealed she had only intended to take a break from the holiday rush, only for the villainess to decide to go through with that plan before turning the elves into vampire bats to attack Grim and Mandy. While Grim and Mandy were chased into the toy room by the vampiric elves and fought them off, Billy discovered a hologram device Santa installed in case of a vampire attack, which had a holographic recording of Santa giving instructions on how to save him if he were to be bitten by a vampire.

After leaving Grim to deal with the elves, Mandy armed herself with a doll to defeat and kill Nancy, confronting the villainess in an ice cavern and being shocked to see her transform into a large bat. But before the two could do battle, Billy went to the cellar and presented Santa with the cure for his vampirism: chocolate chip cookies, with Santa returning to his normal state before confronting his wife. After Nancy approached him, Santa told her that Billy's only wish for Christmas was for them to get along, with Billy reminding Nancy of the true meaning of Christmas and Santa apologizing to his wife for leaving her with all the work. Realizing the error of her ways, Nancy apologized to Santa before transforming back to human form and hugging him, with both proclaiming they couldn't stay mad at each other.

After gathering back at the house, Nancy apologized to the trio for all she'd put them through, but added that all she wanted for Christmas was some help for all her Christmas duties. Mandy replied by saying they could work something out, while Santa also revealed that he still loved Nancy in spite of knowing she was a vampire, while confessing that this had not been the first time she turned him into a vampire. Nancy then proclaimed that it had been the best Christmas ever before joining hands with everyone else as the episode ended. 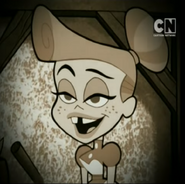 Nancy in her youth 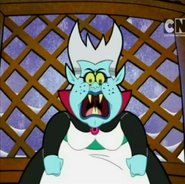 Add a photo to this gallery
Retrieved from "https://femalevillains.fandom.com/wiki/User_blog:Ezekielfan22/Nancy_Claus_(The_Grim_Adventures_of_Billy_%26_Mandy)?oldid=136985"
Community content is available under CC-BY-SA unless otherwise noted.