Start a Wiki
Misha Goshwalla is the villainess of "Murder on Campus", case #32 of the crime solving game Criminal Case (release date June 28, 2013). She was a junior student at Grimsborough University and the sister of incoming freshman student, Rani Goshwalla. It was revealed that Misha was not pleased with Rani attending her university, as she had always harbored jealousy towards her sister for (in her mind) always excelling over her and doing so to make her miserable.

Her jealousy finally came to a point when Rani went through the hazing initiation for Psi Sigma Gamma, a college sorority Misha had been suspended from for drinking. After sorority president Madison Springer phoned Misha about Rani passing the initiation with flying colors, Misha finally decided to confront her sister on how she felt, hoping she'd understand.

But when Misha saw Rani, having just left a hazing ritual and wearing nothing but her bikini and covered in marker writings, Misha decided to prank Rani to humiliate her in front of the whole campus. After goading Rani into drinking excessively, Misha tied up her intoxicated sister and used a funnel to force her to drink more alcohol until she passed out before leaving her to be found in the morning. But unbeknownst to Misha, an ant hill was near where she'd bound Rani, and she ended up dying from asphyxiation as a result of the ants crawling into her mouth and nose.

Misha was ultimately exposed as Rani's killer and was confronted at her home by detective David Jones and the player. Misha immediately confessed to her ill-fated prank against Rani, revealing her long-held jealousy against her while showing tearful remorse at having unintentionally killed her sister. At her trial, Misha was charged with manslaughter and sentenced to twelve years in prison, with the conditions that she'd have regular psychiatric care and the chance to continue her education from within prison. 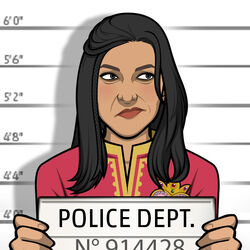 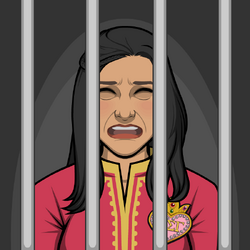 Add a photo to this gallery
Retrieved from "https://femalevillains.fandom.com/wiki/User_blog:Ezekielfan22/Misha_Goshwalla_(Criminal_Case)?oldid=146168"
Community content is available under CC-BY-SA unless otherwise noted.