Mandy Lane (Amber Heard) is the titular protagonist and hidden plot-twist villainess of the 2006 film All the Boys Love Mandy Lane (released in the US in 2013). She was a brooding, quiet, reserved, pensive, and very charismatic Texas high school student living with her aunt Jo after her parents died when she was a child. Her backstory also revealed that she was an outsider at her school before she blossomed physically, earning her the attention of several of her male classmates.

The film's opening showed Mandy being invited to a pool party by Dylan, with Mandy accepting his invitation on the condition that her best friend, Emmet, get to come as well. Mandy quickly became uncomfortable at the party, however, when Dylan attempted to seduce her and later attacked and tried to drown Emmet when he intervened. The party then took a dark turn when Emmet goaded Dylan into jumping into the pool from his roof, hitting his head on the cement and dying as a result.

Nine months later in the film's present events, Mandy had now befriended many of Dylan's popular friends, while generally ignoring the now completely ostracized Emmet. When Mandy's friend Red announced he was throwing a party at his father's cattle ranch, Mandy accepted an invitation and attended along with her other friends: Chloe, Bird, Jake, and Marlin. On the way to the ranch, Bird warned Mandy about how many of her male friends were going to try and "get with her" and how while he was also interested in her, he wasn't like his other friends. Mandy appeared to reciprocate Bird's feelings, allowing him to kiss her on the cheek and seemingly preparing to kiss him before being interrupted by Garth, the ranchhand who had come to take them to the ranch. Mandy later rejected Jake as he attempted to seduce her, prompting Jake to accuse Mandy of thinking herself better than everyone else.

The party takes a violent turn, however, when Emmet began attacking and murdering the teens, wanting revenge for the bullying he suffered at their hands. Mandy and the rest of her friends seemed to only become aware of Emmet's murderous rampage after he killed Jake, Marlin, and Bird, with Emmet leaving a bloodied message on the refrigerator for Mandy before shooting Garth as he and the others attempted to flee the ranch. While Mandy stayed to tend to Garth, Red and Chloe attempted to flee in the latter's car, only for Emmet to shoot and kill Red, forcing Chloe to flee as he chased after her in her car. Elsewhere, Mandy went to get Garth's car, in the process finding the knife Emmet had used to kill Bird.

Mandy then saw Chloe being chased by Emmet and called for Chloe to run to her, pulling her into a seemingly protective embrace. But as she held Chloe, Mandy matted Chloe's hair with blood before letting her go, revealing that she had plunged the knife into Chloe's stomach. As Chloe bled to death, the evil Mandy asked Emmet what took him so long, revealing that she had colluded with Emmet to murder her friends; with implications being that Mandy despised how her male friends lusted after her and how they all only befriended her when she became attractive to them, showing her true nature as an cruel, shady, cold, impassive, morbid, vicious, maladjusted, and very manipulative femme fatale. Mandy also laughed as Emmet offered her an earring he'd taken from Marlin and callously pulled the knife out of Chloe's stomach and gave it to him, as Emmet revealed that he'd written about their plan in a journal for the police to find and thus learn what motivated them. Emmet then brought up the suicide pact he and Mandy had planned on for the end of the massacre, giving her a handful of pills to use to kill herself after shooting him to death. But instead, Mandy kissed Emmet before angrily accusing him of only agreeing to their plan to win Mandy's affections, while also dropping the pills and revealing that she had never intended to go through with the pact.

As Emmet held Mandy at gunpoint and attempted to get her to go through with their plan to die together, Mandy boasted that one of them would die before calling out for Garth's help, prompting him to shoot Emmet with a rifle. Emmet survived the shot and attacked Garth with his machete, prompting Mandy to stab Emmet with the knife. As Emmet chases Mandy into a muddy pit of cattle carcasses, Emmet angrily demanded to know why Mandy had gone back on her word after everything he'd done for her. In response, Mandy laughed and spat at Emmet before taunting him by saying they should "just be friends" before escaping Emmet's grip, using a log to battle against the machete-wielding Emmet. Mandy was eventually able to use her makeshift weapon to disarm Emmet, allowing her to beat/stab Emmet to death as she rejected his pleas to die with him, stating that she wanted to finish high school first.

Mandy then returned to the passed out Garth and seemingly prepared to stab him to death, only to instead spare his life and drive away with him in his jeep; likely due to having grown fond of him for not pursuing her like her other male friends. As the pair drove away, Garth thanked Mandy for saving their lives, completely unaware of Mandy's villainous role in the massacre. 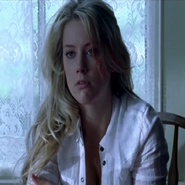 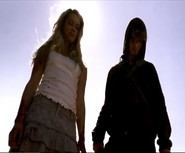