Start a Wiki
Leslie Handleman (Samantha Ferris) is a villainess from the 2004 video game CSI: Dark Motives. She appeared in the game's first case, "Daredevil Disaster", being introduced as the owner of Vegas Motorcycle, a motorcycle repair shop. Leslie was questioned by the player and Catherine Willows regarding an accident that injured Ace Dillinger, a stuntman for the TV show World's Wildest Stunts who occasionally had his motorbike serviced as Leslie's shop.

While Leslie initially claimed she was on good terms with Ace, her backstory revealed the truth. Leslie had been promised by Ace that he would promote her role in his show, even allowing Ace to get work done on his bike free of charge. But instead of fulfilling his promises, Ace continued bilking Leslie without going through on his word, leaving Leslie enraged.

Leslie was then contacted by Ace's producer, Cory Muzotti, and enlisted her in a plot to gain ratings for his struggling show: sabotaging Ace's bike during a stunt so he would crash. Wanting both the money Cory was offering to keep her shop and possibly revenge on Ace for deceiving her, the evil Leslie went through with Cory's plan, weakening his bike's throttle return spring with a pair of Komawa-brand cutters given to her by Cory. Afterwards, Leslie (having doubts about the plan) went to the nearby casino to work up the nerve to warn Ace, only to instead back out and allow Ace to do the stunt, leading him to crash and become injured.

Ultimately, Leslie's fingerprints on the tool used to sabotage Ace's bike revealed her role in the crash, leading her to be brought in for interrogation. After initially trying to deny involvement, Leslie confessed to being hired by Cory to sabotage Ace's bike, detailing their plan as well as Ace bilking her for free services. Leslie also stated that she couldn't believe she went through with Cory's plan, as well as how she'd broken down in tears after seeing Ace crash and was glad to learn he wasn't badly hurt. After Cory and David McLadden (World's Wildest Stunts' stunt coordinator who helped Cory covered up his role in Ace's accident) were also exposed for their actions, Leslie was arrested (off-screen) for her role in the conspiracy. 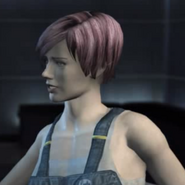 Leslie during her villainous reveal
Add a photo to this gallery
Retrieved from "https://femalevillains.fandom.com/wiki/User_blog:Ezekielfan22/Leslie_Handleman_(CSI:_Dark_Motives)?oldid=175610"
Community content is available under CC-BY-SA unless otherwise noted.