Start a Wiki
Lana Price (Angie Everhart) was a villainess from the 2003 film Wicked Minds. She was the new wife of wealthy businessman Mason Price, and was the stepmother to his college graduate son Holden. Her marriage to Mason, however, quickly became abusive as Mason grew possessive and controlling of her, leading Lana to have an affair with Holden.

But unbeknownst to Lana, Holden was conspiring with his college girlfriend, Nicole Cashper, in a plot to kill Mason and set Lana up as the murderer. To do so, Nicole videotaped Lana and Holden in the midst of having sex, using it to blackmail her for $100,000. Holden then killed Mason by poisoning him with pesticide, and he and Nicole then conspired to set things up to look like Lana had killed him and was attempting to frame Holden before killing him and staging his death as a suicide. Despite her obliviousness to the plot against her, however, Lana assured Holden that if he had killed Mason, she would do what she could to protect him.

In the film's climax, as Holden and Nicole rejoiced at their plot succeeding, it was revealed that Holden knocked Lana out with a punch before ordering Nicole to kill her. But instead of shooting her as Holden wanted, Nicole dragged Lana to a cliffside and threw her off, believing the fall would kill her and that her body would be washed away. But instead, Lana returned to the house and shot Holden before holding him at gunpoint, having become a vengeful villainess intent on killing Holden for betraying her and trying to kill her. As Lana blasted Holden for using her to get his father's money, Holden attempted to claim Lana was a hypocrite by implying she had married Mason for his money and out of desperation to have someone love her.

Lana then asked Holden if he'd ever actually loved her, only for Holden to refuse to say before attempting to run, with Lana chasing him to the cliffside before shooting him again. But before Lana could kill Holden, she was shot and killed by the arriving police, having been called by Holden as part of his and Nicole's scheme of framing Lana. 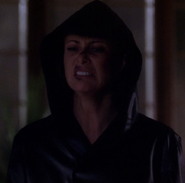 Lana's return as a vengeful villainess
Add a photo to this gallery
Retrieved from "https://femalevillains.fandom.com/wiki/User_blog:Ezekielfan22/Lana_Price_(Wicked_Minds)?oldid=174838"
Community content is available under CC-BY-SA unless otherwise noted.