Kaori Nakahara (Eiko Yamada) is the main villainess of "Alpine Hut in the Snowy Mountain Murder Case", episode 2.18 of Case Closed (airdate February 3, 1997). She was a researcher for Tohto University Medical School and worked under the tutelage of professor Masashi Oyama.

Her slight backstory revealed that Kaori's father passed away from colon cancer, inspiring her to pursue a medical career and eventually form a thesis about using genetics to cure the disease. But after completing her thesis, Kaori was shocked when Masashi stole her research and claimed it as his own, threatening to destroy her academic career if she told anyone the truth.

Enraged at her professor's betrayal, having viewed him as a father figure, Kaori decided to use a trip to a mountain cabin that she and Masashi were taking with three other students (Tomoyasu Kanazawa, Ginji Tobita, and Kaho Ezumi) to kill him. Using her knowledge of her friends' favorite snacks, Kaori previously bought the food they would request and left the cabin during the gathering under the guise of buying food. Kaori then broke into Masashi's room as he was watching television, tying him up and gagging him before puncturing his lungs with a knife, torturing the man before delivering a stab wound to his back, which ultimately killed him.

When the group began to get worried about Masashi's absence, Kaori went to "discover" his body. When she saw that Masashi had left a cryptic dying message on the coffee table naming her as his killer, Kaori pulled the tablecloth from the table to hide the message. But Conan Edogawa was ultimately able to deduce the disturbed message, and used it as well as Kaori's faked alibi to expose her as the killer. After initially denying the claims, the evil Kaori grinned as she confessed to killing Masashi, revealing how he had stolen her life's work from her and tearfully apologizing to her deceased father for (in her mind) failing him. Kaori was presumably arrested offscreen. 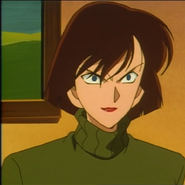 Kaori's evil glare and smirk during her villainous reveal
Add a photo to this gallery
Retrieved from "https://femalevillains.fandom.com/wiki/User_blog:Ezekielfan22/Kaori_Nakahara_(Case_Closed)?oldid=175065"
Community content is available under CC-BY-SA unless otherwise noted.