Heidi Ho Swift (Kari Wahlgren) is the villainess of "Be Cold, Scooby Doo!", episode 1.19 of Be Cool, Scooby Doo! (airdate March 5, 2016). She was a national snowboarding champion who encountered the Scooby gang at the Sunnyside ski lodge. In her first onscreen appearance, Heidi was shown to be a snobbish and arrogant athlete, and warned the Scooby gang (in snowboarder jargon) to leave the resort before the snow monster that was plaguing the lodge attacked them.

But in the episode's conclusion, the snow monster was caught and tied up by the gang and was unmasked to be Heidi. Not wanting Sunnyside to become a major tourist destination, the evil Heidi disguised herself as the snow monster as a way to use the local legend to scare away tourists who visited the lodge. After Velma explained Heidi's nefarious actions, Heidi was arrested, with the police rolling her away while she was still in her snowman suit.

Heidi, disguised as the snow monster 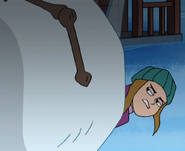 Heidi unmasked and arrested
Add a photo to this gallery
Retrieved from "https://femalevillains.fandom.com/wiki/User_blog:Ezekielfan22/Heidi_Ho_Swift_(Be_Cool,_Scooby_Doo!)?oldid=200778"
Community content is available under CC-BY-SA unless otherwise noted.