Start a Wiki
Giulietta Capecchi is a recurring character from Criminal Case: Mysteries of the Past. In case #59, "Best Laid Plans", Giulietta was revealed as a villainess.

Giulietta was a member of the infamous Capecchi crime family, being the daughter of Vittorio and Franca Capecchi and the sister of Lucrezia Capecchi (who was murdered in case #7, "Let Me Down Gently". After growing to see the injustice in the race war her family was creating, Giulietta eventually began working to end the war between Italians and Irish, working alongside her secret lover Seamus O'Neill.

After she was nearly killed by her mother for "betraying" the family and Seamus was killed by Adrienna Brassiere, Giulietta stormed into the Concordian airship armed with a pistol, demanding that the detectives take her to her mother (having been imprisoned for her attempted bombing of the Concordian train station) so she could kill her in revenge for Seamus' death.  Maddie O'Malley refused and tried to convince Giulietta her mother wasn't responsible for Seamus' murder, only for Giulietta to storm out claiming she would find her own way to kill her mother. Giulietta later returned to turn herself in, drunk and speaking of how Seamus wanted to kill Franca so he and Giulietta could be together, tearfully proclaiming Seamus would be alive if she had let him do so. Later on, a heartbroken Giulietta began contemplating suicide before deciding to leaving Concordia for a while after being calmed down by the player and Maddie, deciding to start a new life as Seamus wanted her to.

Giulietta reappeared in case #56, "Resistance is Fatal", where the Concordia Flying Squad investigators were surprised to learn that Giulietta was leading the resistance against Concordia's corrupt new mayor, Justin Lawson, working closely with fellow resistance member Enzo Jonas. Working alongside the Flying Squad, Giulietta and her resistance helped the Squad members formulate a plan to ambush and arrest Lawson to end his tyrannical hold over Concordia.

However, prior to the events of "Best Laid Plans", Giulietta arrived at the town square earlier with Enzo to prepare for their plot, only to be spotted by Insepctor Jaubert, who acted as Lawson's right-hand man. The confrontation led to a physical bout between Jaubert and Giulietta before Giulietta was able to shove Jaubert off of her, causing Jaubert to fall into the nearby guillotine, with the rope slipping and allowing the blade to cut Jaubert in half. Horrified by her actions and knowing that Lawson would have her executed if he learned that she'd accidentally killed Jaubert, Giulietta went along with Enzo as he helped her escape and cover her tracks to protect her.

Ultimately, though, the player and Isaac Bontemps were able to deduce that Giulietta was Jaubert's killer and confronted her, with Isaac being especially shocked at Giulietta's actions. While she initially tried to deny everything, Giulietta eventually confessed to unintentionally killing Jaubert. Giulietta initially attempted to cover up Enzo's involvement in what happened, only for Enzo to come clean and confess to helping Giulietta cover her tracks before both of them begged the player and Isaac not to turn Giulietta in and allow Lawson to have her executed. Giulietta and Enzo also offered to help when Charlie Dupont arrived and revealed how most of the Concordia Flying Squad had been arrested by Lawson's men, only for Isaac to order them to flee until it was safe. After Lawson was killed by Isaac and his regime was dismantled, Giulietta and Enzo willingly turned themselves in for Jaubert's murder. 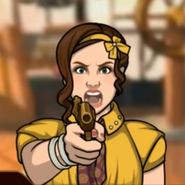 Giulietta armed with a pistol 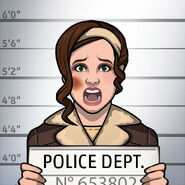 Add a photo to this gallery
Retrieved from "https://femalevillains.fandom.com/wiki/User_blog:Ezekielfan22/Giulietta_Capecchi_(Criminal_Case)?oldid=172800"
Community content is available under CC-BY-SA unless otherwise noted.