Cindy Hamilton was a minor villainess from "Day of the Dead", case #49 of Criminal Case: Save the World, the 3rd season of the crime solving game Criminal Case (release date September 15, 2016). She was the sister of archaeologist Marvin Hamilton and the project coordinator in the construction of a wall separating the United States from Mexico.

Cindy was found dead at her construction site in Tijuana, Mexico by both the player and Jack Archer, having been strung up from a crane hook, but not before her killer beat Cindy to death with a piñata bat (with streamers even having been placed on her body). Over the course of the investigation, Cindy was revealed to have been a callous and racist nationalist in life. It was first discovered that prior to her death, she was having an affair with supply manager Ramon Cortez. Furthermore, she was also planning to replace all of the Mexican contractors for the wall (including Chico Alegria) with Americans, as she believed that only the United States should profit from the wall's construction.

Ultimately, Cindy's killer was revealed to be Madena Cuervo, a protester against the wall. Prior to her death, Madena met with Cindy to talk to her about the negative consequences the wall's construction would bring, showing her a photo of her daughter Rose and explaining how the wall would make it to where she wouldn't be able to see her again. Upon being told this, the bigoted Cindy tore up the photograph and laughed at Madena, along with calling her daughter a "half-breed". Cindy's callous remarks drove Madena over the edge, resulting in her beating Cindy to death with the pinata bat and stringing her body up to send a message against the wall. 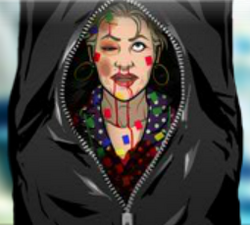 Cindy's corpse
Add a photo to this gallery
Retrieved from "https://femalevillains.fandom.com/wiki/User_blog:Ezekielfan22/Cindy_Hamilton_(Criminal_Case)?oldid=144732"
Community content is available under CC-BY-SA unless otherwise noted.