The Female Villains Wiki
Register
Don't have an account?
Sign In
Advertisement
in: Blog posts, 2010s, Begs Villain for Mercy,
and 15 more

Blaire Lily (Shelley Hennig) was the protagonist villainess of the 2015 horror film Unfriended.

Blaire was a Californian high school student and the former best friend of Laura Barns, a teenager who committed suicide after a viral video of her at a party caused her to be bullied relentlessly. The movie opened with Blaire watching a video of Laura's suicide before being interrupted by a Skype call with her boyfriend, Mitch Roussel. They are soon joined by a few friends, along with an unseen user, who would soon be revealed to be Laura Barns' spirit.

Over the course of the movie, Blaire and her friends are tormented by Laura in retribution for them bullying her, as well as killing off anyone who tried to leave the chat. During a game of Never Have I Ever that was initiated by Laura, Blaire was forced to reveal that she cheated on Mitch with his friend Adam Sewell, causing Mitch to break down. Laura then sent her and Adam printed messages, each stating that the other will die if they reveal their message. When Mitch threatens to leave, which would result in Laura killing him, Blaire reveals her message and Adam dies when Laura forces him to shoot himself in the head.

Blaire's villainous reveal doesn't come until later, when she and Mitch are the only teens left alive. When asked by Laura who posted the video that led to her suicide, Blaire feigns innocence, but after Laura privately messages Blaire on Facebook and tells her that she doesn't have to protect Mitch anymore, Blaire turned heel by sending Laura a message saying he did it, resulting in Mitch's death. Blaire then began to cry as Laura asks her for one more thing. Blaire begs Laura to let her go, even showing her a Facebook photo of her and Laura as children. It is then that Laura posts the unedited footage of her video on Blaire's Facebook account, revealing her to be the one who recorded the video. Blaire tearfully apologized (it's not clear whether this is genuine or just Blaire attempting to appease Laura into sparing her) as vicious comments were posted on the video chastising Blaire's cruel act. Laura then leaves the Skype call and appears in Blaire's bedroom in physical form, slamming her laptop shut and attacking the evil Blaire, presumably killing her. 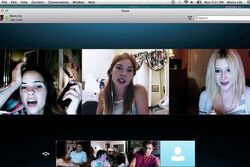 Blaire in the group Skype call 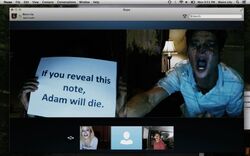 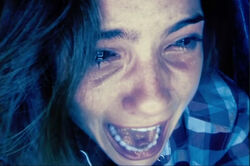