Ashley Jamison (Stéfanie Buxton) is the hidden villainess of the 2005 Lifetime movie A Killer Upstairs. She was the daughter of wealthy hotel magnate David Jamison, who was married to former model Vivian Jamison, his second wife and Ashley's stepmother.

As revealed in the film's climax, Ashley had always hated Vivian, believing she only married her father for his money and blaming her for her mother's depression and death following her divorce from David. Ashley's hatred for her stepmother reached its' peak when she learned Vivian was having an affair with Michael Nowlin, their car detailer and the teenage son of the film's protagonist Sandra Nowlin. It was then that Ashley hired Vivian's ex-lover, Lyle Banner, to kill Vivian and frame Michael for the crime, using a bracelet gifted to her by her father as a down payment.

Lyle went about killing Vivian after she had a fight with Michael, bludgeoning her to death with a statue that he later planted in Michael's closet, effectively framing him and leading to the police arresting him. Lyle also sabotaged Sandra's attempts to prove her son's innocence, even killing liquor store clerk Johnny after learning he was on the verge of providing Michael with an alibi to exonerate him. Throughout the movie, Ashley acted as support to her grieving father and shared his belief that Michael killed Vivian, hiding her role as the mastermind behind her stepmother's murder. In the film's climax, however, Sandra inadvertently revealed Ashley's villainous secret when she found the pawn shop receipt in Lyle's house for the bracelet, buying it from the store and showing it to David.

After recognizing the bracelet as Ashley's, David called her downstairs and confronted her, disbelieving her initial claims that it was stolen from her apartment. After continuing to deny everything, Ashley eventually confessed to hiring Lyle to kill Vivian, blasting her for (in her mind) destroying their family and making a mockery of David, while also blaming her for her mother's death. It was then that Lyle suddenly appeared in the house with a gun, having become alerted by pawn shop owner Freddy that Sandra bought the bracelet and had come to receive the rest of his payment from Ashley before fleeing town. As Lyle prepared to kill David when he claimed there wasn't enough money in the house, Ashley asked him to stop and went to her father's safe to retrieve the money.

While she was gone, however, Lyle taunted David about how Vivian had slept him with for a year behind David's back, leading to him shooting David in the leg when he lunged at him. As Lyle demanded his money and threatened to kill the three, Ashley pulled out a gun and shot Lyle in the chest, killing him. The evil Ashley then turned her weapon on Sandra as she retrieved Lyle's gun, revealing her intention to kill Sandra and stage the scene to look like Lyle had shot her father and killed Sandra before she killed him, while also covering up her involvement in Vivian's death by getting rid of the pawn shop receipt and bracelet. But as she prepared to kill Sandra, David (who had survived being shot by Lyle) came to and revealed that he knew the truth, while also begging his daughter to surrender. Ashley, realizing that she had already failed at getting away with her crime of killing Vivian due to her father surviving, eventually fell to her knees in tears as she let go of the gun, and was later handcuffed and arrested after Sandra called the police.

Ashley during her villainous reveal 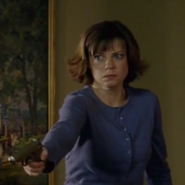 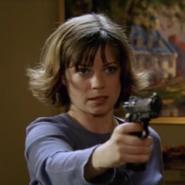