Aphro-Dyte is the villainess of "Programmed to Kill", case #50 of Criminal Case: Pacific Bay, the 2nd season of the crime solving game Criminal Case (release date April 23, 2015). She was a robot assistant that worked with tech company Meteor Systems, having been created by Meteor Systems programmer Bob Levene. Aphro-Dyte appeared as a suspect in case #49, "Immortal Sin" before being revealed as a villainess in "Programmed to Kill".

When Bob Levene was found dead in the robot producing department of Meteor Systems, Aphro-Dyte was questioned after it was discovered by the player and Amy Young that Bob had created her. While Aphro-Dyte appeared horrified by her creator's death, this was later revealed to be a mask for her callous and hegemonic personality.

After Per-Sephone, a fellow robot working for Meteor Systems, was indicted for unintentionally killing her creator, Aphro-Dyte grew to believe that humans had gone too far and that robots were destined to take over Innovation Valley. To do so, Aphro-Dyte programmed nanobots to make humans "humbler". She then injected the nanobots into Bob, only for them to view him as an error and kill him. It was then that the evil Aphro-Dyte came to believe that humans had to be eradicted and set the nanobots free on Innovation Valley, infecting numerous civilians (including Amy).

With Frank Knight's help, the player discovered the evidence proving Aphro-Dyte's guilt and confronted her. After initially denying everything, Aphro-Dyte commended the player's intelligence and confessed to killing Bob and setting the dangerous nanobots loose on Innovation Valley, proclaiming that Per-Sephone's deactivation proved that humans were ready to kill all the robots and that Bob's death was proof that robots were meant to rule the world. Aphro-Dyte was arrested and put on trial, where she continued to rant about how robots were "logically" meant to rule the Earth.

After being sentenced to fifty years in prison by judge Edward Dante, Aphro-Dyte boasted that it meant nothing to her due to having immmortality before shutting herself off and uploading herself to Innovation Valley's Internet network, allowing her to control all the robots and nanobot infected citizens within the area. Ultimately, Aphro-Dyte's plans were stopped by Meteor Systems turning off all malfunctioning technology and all the Innovation Valley citizens infected with the nanobots being given an antidote, and Aphro-Dyte was most likely shut down permanently as punishment for her crimes. 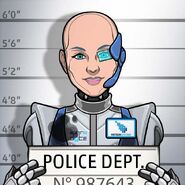 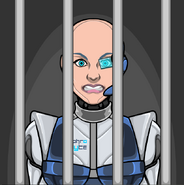 Add a photo to this gallery
Retrieved from "https://femalevillains.fandom.com/wiki/User_blog:Ezekielfan22/Aphro-Dyte_(Criminal_Case)?oldid=162468"
Community content is available under CC-BY-SA unless otherwise noted.
FandomShop Newsletter Join Fan Lab