Start a Wiki
Annabelle Higgins aka Janice (Tree O'Toole as teenager; Talitha Eliana Bateman as child) was the tertiary villainess from the 2014 horror film Annabelle, and also appeared as the main protagonist of its' 2017 sequel, Annabelle: Creation, with the latter film constituting Annabelle's first chronological appearance in the series.

In Annabelle: Creation, Annabelle was revealed to have been born as Janice and was established as an orphan who contracted polio and was left paralyzed and wheelchair bound. Janice, along with her best friend Linda, are transferred to the home of Samuel and Esther Mullins after their original orphanage closed down, and it was at the house that Janice discovered an ominous porcelain doll locked away in the closet of the Mullins' daughter Annabelle, who died years prior after being struck by a car.

Unbeknownst to Janice, however, the doll acted as a conduit for a malevolent demon, which had tricked the Mullins to believing it was the spirit of their daughter. As a result of Janice's unearthing of the doll, the demon attacked and possessed Janice, with the possessed girl attempting to kill Linda as the demon wrecked havoc on the orphans and killed Esther. Ultimately, Sister Charlotte (the orphans' guardian) subdued Janice by locking her in the closet where the doll had been stored, only for the possessed villainess to escape the closet and find her way to an orphanage in Santa Monica. At the orphanage, Janice adopted the name Annabelle and was adopted by Pete and Sharon Higgins.

Events of Annabelle and Death

Prior to the events of Annabelle, Annabelle (now a teenager) ran away from home and became involved in the Satanic cult known as "Disciples of the Ram", becoming lovers with another equally psychotic member of the cult. In the beginning of the movie, the evil Annabelle broke into her parents' house late one night with her lover, with Annabelle killing Pete by slashing his throat with a knife. After Annabelle coldly greeted her adoptive mother, the couple proceeded to stab Sharon to death as well, with the murder attracting the attention of the Higgins' neighbors, Mia and John Form (the film's protagonists). When John went to investigate, the couple attacked him before going to the Form house, with Annabelle encountering Mia as she cradled a porcelain doll (the same model the demon used as its' original conduit) and sinisterly stated that she liked the doll before her lover attacked and stabbed Mia.

After the police arrived and shot Annabelle's lover dead, the police broke into the nursery and found Annabelle dead, having slit her own throat and drawn a strange mark on the wall in her blood. When the Forms were plagued by supernatural activity, it was initially believed Annabelle had attached her spirit to the doll before killing herself. But over the course of the film, it was revealed that Annabelle's suicide had actually allowed a powerful demon to attach itself to the doll.

Annabelle as a child under her real name Janice 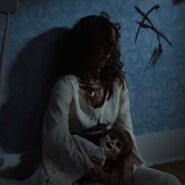 Annabelle's death
Add a photo to this gallery
Retrieved from "https://femalevillains.fandom.com/wiki/User_blog:Ezekielfan22/Annabelle_Higgins_(Annabelle)?oldid=100279"
Community content is available under CC-BY-SA unless otherwise noted.