Aileen Greene was a minor villainess from "Family Blood", Case #15 of the crime solving game Criminal Case (release date January 24, 2013). She was a former drug addict and the wife of the wealthy Paul Greene, as well as the mother to their infant son Oliver and the stepmother to Scott Greene, Paul's teenage son from his deceased first wife.

Aileen was the victim of the case, as she was found tied up and beaten to death in Oliver's bedroom, having been killed while he was in his crib. The investigation revealed that Aileen's father-in-law Alden Greene and even her own husband looked down on Aileen for her meager past and that her homeless ex-husband, Tom Hunt, had tracked her down, with Aileen bringing him food and whiskey to the abandoned factory he was living in.

Aileen was also revealed by her nanny, Irma Fusslepot, to be an inattentive mother, with Irma having to raise Oliver mostly on her own. She was also revealed to be stealing money from her family to give to Tom, as some money was found hidden in Oliver's toy chest. In regards to her murder, it was revealed that Scott had killed his stepmother when she took a valuable and rare baseball card from him that he got from his grandfather, callously tearing it to pieces when he asked for it back. Enraged, Scott beat Aileen to death with a baseball bat and tied her up as a way to regain control over his cruel stepmother. 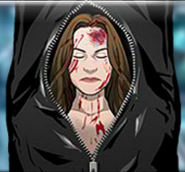 Aileen's corpse
Add a photo to this gallery
Retrieved from "https://femalevillains.fandom.com/wiki/User_blog:Ezekielfan22/Aileen_Greene_(Criminal_Case)?oldid=139064"
Community content is available under CC-BY-SA unless otherwise noted.