Start a Wiki
Abigail Miller (Cheryl Ladd) is the villainess of the 2017 Hallmark movie Royal New Year's Eve. She was the head of successful fashion manager of fashion magazine Applique and the boss of her assistant, aspiring designer Caitlyn (the film's main protagonist). Abigail was also the mother of fashion designer Leighton Miller, hiring her design for her company.

The film quickly established Abigail as a callous and demanding boss, being strict with Caitlyn and Leighton regarding their upcoming fashion show, which was being attended by royal couple Prince Jeffrey and Lady Isabel Collins. Abigail revealed that she wanted the show to be perfect due to Jeffrey being believed to be intent on proposing to Isabel during the party so they could use the moment for a magazine cover, and also was intent on having Isabel see Leighton's dresses. Abigail begrudgingly allowed Caitlyn and other employees leave to spend Christmas Eve at home, but argued to Leighton that getting ready for Isabel (believing she could kickstart her daughter's designing career) and proclaimed that it was more important than Christmas.

During the show, however, Abigail was shocked when Isabel instead praised Caitlyn when she arrived wearing a dress she had designed herself, proclaiming she wanted to wear one like it for her New Year's Eve party. Chagrined at Isabel's decision, Abigail had Caitlyn go backstage to help start the fashion show and assist Leighton, doing so to keep her away from Isabel. After Isabel met with Caitlyn and decided to have her design a dress for her party, Abigail voiced her outrage to Leighton, accusing Caitlyn of stealing Leighton's opportunity and responding to her daughter's defense of Caitlyn's designs by arrogantly stating she decided what made a beautiful design. Abigail also began to show her true colors by revealing her plot to "change Isabel's mind", intending to give Caitlyn extra work for party preparations to make it to where she couldn't work on Isabel's dress. Abigail also planted seeds of doubt in Isabel's mind by claiming Caitlyn hadn't handle such a big project before and that she should have a back-up dress in mind if something were to go wrong.

After hearing Isabel say that it would take something big for her to consider changing her mind about wearing Caitlyn's design, Abigail began turning heel by telling Leighton as they were looking through designs that she planned to sabotage Caitlyn so Isabel would choose Leighton's dress over hers. Frustrated, Leighton confronted her mother on her plans, arguing that she wanted to build her career on her own merit, with Abigail responding that she just wanted to give her daughter an edge in what she considered a cutthroat business and that she would be "restrained" in her actions. Abigail later visited Caitlyn's apartment as her roommate Doris and Prince Jeffrey's servant Barnaby were there, distracting the two by claiming she saw Jeffrey outside before taking a picture of Caitlyn's design.

Abigail fully turned heel by revealing her plans to Leighton: to make it appear that Caitlyn had stolen her design from someone else, thus destroying her reputation and allowing Leighton to take over Isabel's designer. Leighton adamantly disapproved of her mother's immoral idea and pleaded with her to promise she wouldn't go through with it, with Abigail seemingly agreeing to stand down. However, the evil Abigail continued her villainous handiwork, eventually revealing Caitlyn's "theft" to Isabel, callously firing Caitlyn as she took Isabel to try on Leighton's design.

During the New Year's Eve party, however, Caitlyn was encouraged by Barnaby (who was aware of Jeffrey and Caitlyn developing romantic feelings for each other) to attend the party wearing her dress. As an infuriated Abigail began to confront Caitlyn, Leighton told her mother to leave her alone before apologizing to Caitlyn, revealing her mother's evil deeds and revealing her intentions of having Applique sponsor a fashion show for Caitlyn. Despite reservations, Abigail (after pressuring from her daughter) agreed to Leighton's wishes and complimented Caitlyn's dress, and half-hearedly offered to rehire Caitlyn as her assistant. Caitlyn, however, declined and revealed she wanted to start off fresh in the new year, surprising Abigail before she went to share a dance with Jeffrey. Abigail's fate regarding her actions as a saboteur, however, is never revealed. 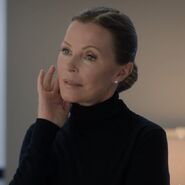 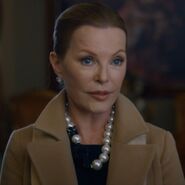 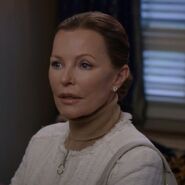 Add a photo to this gallery
Retrieved from "https://femalevillains.fandom.com/wiki/User_blog:Ezekielfan22/Abigail_Miller_(Royal_New_Year%27s_Eve)?oldid=188688"
Community content is available under CC-BY-SA unless otherwise noted.