Start a Wiki
The Tri Pi's are a mean group of girls from the 2002 movie Sorority Boys.  The Tri Pi's are led by Tiffany (Bree Turner), who is the only one named in the film.  The others are listed as Nikki Martin, Monica Staggs, Lydia Hull, and Jessica Kiper, Holly Beavon, Victoria Blackburn, Erin Carufel, and Julia Milova.

Three boys are booted out of their fraternity and figure out a plan to dress up as women to get back in the house during a party to steal a tape recording.  They are caught and thrown out when they are mistaken for being members of DOG, a sorority on campus known as the DOG-Catchers. They decide to pledge the sorority DOG, and figure out how badly they have been treating the members of DOG.  In the process, they develop a rivalry with the Tri Pi's, a sorority on campus known for pretty stuck up girls.  As a result, a powder-puff football game is organized between the two houses. During the game, the Tri Pi's are humiliated when one of the boys of DOG turns a sprinkler on them.  The crowd goes nuts as the girls tight pink shirts become nearly see-through.  Then, they fall in mud later in the game. After DOG wins, they win tickets on the KOK-Tail Cruise.  The Tri Pi's get on the boat before the DOG girls can, and yell "No DOGS allowed!".  However, one of them acquires a speedboat and delivers the DOG girls to the boat.  They then one by one kidnap the Tri Pi's off the boat by grabbing them from behind and casting them adrift on a life raft.

After the credits roll on the movie, it is learned that the Tri Pi's have been lost far out at sea.  They have been reduced to cannibalisim.  The surviving Tri Pi's are delirious, heavily surnburned, and gnawing on a leg of one of their sorority sistes. 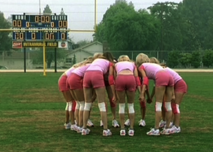 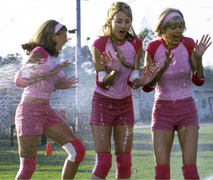 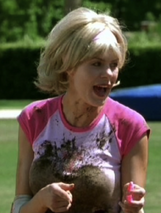 Add a photo to this gallery
Retrieved from "https://femalevillains.fandom.com/wiki/User_blog:Doalfe/Tri_Pi%27s_(Sorority_Boys)?oldid=120529"
Community content is available under CC-BY-SA unless otherwise noted.