Taylor Turner (Sarah Dugdale) is the best friend of main villainess Steffani Howard and acted as the secondary villainess in the 2011 episode "Wrong Number" in the TV series, "R.L. Stine's The Haunting Hour".

Taylor is a mean girl but very shy, so she tends to go along with what Steffani tells her. While visiting Steffani's apartment, Taylor witnessess Steffani's next door neigbor, Ms. Biazevich, get physical with her by pulling her hair for being nasty and playing incredibly loud music. Taylor shuts the door, preventing Mrs. Biazevich from hurting her friend anymore. She later giggles when Steffani prank calls her enraged neighbor to get back at her for pulling her hair. Unknown to her, Taylor would later regret that decision.

The next morning, Taylor gets a call from Steffani telling her to come to her apartment immediately. When she arrives, Taylor finds out that Mrs. Biazevich has died from her illness. She was freaked out and disturbed by the fact that Steffani was flirting with a young paramedic right over Mrs. Biazevich's dead corpse.

Later, Steffani tells her that she received mysterious and freaky text messages telling her to be a nice girl. That night, Taylor and Steffani sneak into Mrs. Biazevich's room and find out that the calls were coming from her phone.

After Taylor and Steffani get help from a former enemy, Adriana (Kacey Rohl), who tells them to go to her uncle Constantine's home, the girls are told that they're in danger due to the possibility that Mrs. Biazevich may be a ghost who's haunting them. Constantine (Andrew Kavadas) gives them a vase full of leaves that will keep them safe from Mrs. Biazevich's ghost.

That night, Taylor keeps Steffani's company after she finished scattering the leaves around her bed to keep her safe. However, it turns out that the leaves seemed to have attracted Mrs. Biazevich's spirit and she attacks the girls. Mrs. Biazevich lets Taylor go because she can see good in her heart but sees that Steffani is still very mean so she traps her in a video in her cell phone. Taylor, scared for her best friend but can't do anything about it, runs out of the room shocked and horrified after witnessing that and scrams away.

Mrs. Blazevich then sends the video to her granddaughter, who is revealed to be Adriana. It turns out that Adriana, Mrs. Blazevich, and Constantine planned this whole ordeal in order to teach Steffani a lesson. Adriana swears at Steffani trapped in the video and deletes the video, effectively killing Steffani by erasing her from existence. This is the end of the show, but if Steffani never existed, this would mean that Taylor must have no memory of her as well. 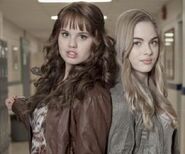 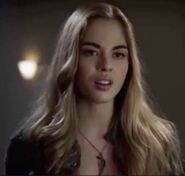 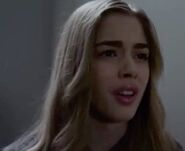 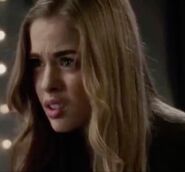 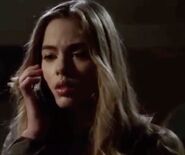 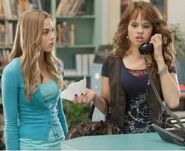 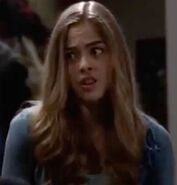 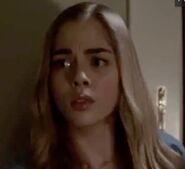 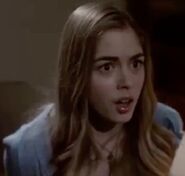 Add a photo to this gallery
Retrieved from "https://femalevillains.fandom.com/wiki/User_blog:Doalfe/Taylor_Turner_(The_Haunting_Hour)?oldid=55002"
Community content is available under CC-BY-SA unless otherwise noted.