Start a Wiki
Sharon Stone (Halle Berry) is a secondary antagonist in the 1994 film "The Flintstones".

Sharon Stone is Cliff Vandercave's ex-girlfriend and ex-henchwoman, and Fred Flinstone's former secretary and former sexual-affair. She is portrayed as the secondary villain, until she switches sides, for her love of Fred. She helps him in his plot to frame a quarry worker for embezzling millions of dollars from Slate & Co. while the two of them run off with the real embezzled money. When Fred Flintstone is chosen to be the scapegoat, Cliff has Miss Stone hired as Fred's secretary, knowing that she will be able to seduce him into doing whatever she wants.

After Fred is brought into his new office, Miss Stone soon arrives and Fred is stunned by her gorgeous body, unable to look away or even blink, until his clear arousal causes his tie to shoot up, amusing Miss Stone. She then entices him even more once she lifts her leg onto his lap and tells him to "use [her] however [he] sees fit" while nearly kissing him. As she slowly leaves the room, Fred stares longingly at her, clearly lost in his desire for his young, beautiful secretary, and showing both Cliff and Miss Stone that their plan is working perfectly.

Miss Stone then prepares the documents that would implicated Fred in the scheme. While she wishes to have him sign them right away, Cliff believes they should wait and see if he will truly do whatever they ask. Cliff then forces Fred to fired Barney, his best friend, which Fred reluctantly does after much hesitation.

Miss Stone then proceeds to have Fred continuously sign the documents for weeks, with Fred not having any idea what they are. When he finally asks Miss Stone what the documents mean, she playfully flirts while saying they are simply forms that would pay the contractors working on Cliff's project. Not personally trusting contractors, Fred tells an annoyed Miss Stone that he will read the documents first. Panicking, Miss Stone lunges onto his desk, and begins seducing him again, only this time much more aggressively. While flaunting her half naked body to an ogling, mesmerized Fred, she asks him not to read the forms, to which he very quickly agrees. However, unbeknownst to both Miss Stone and Fred, Fred's furious wife, Wilma, walks in with their daughter just as Miss Stone begins fondling Fred, who makes it no secret how much he is enjoying being pleasured by his sexy secretary. After a little while, a horrified Fred finally notices Wilma and tries to act as though nothing had been going on, but due to his panicking, he introduces Wilma by the wrong name and forgets his daughter's name. While Miss Stone tries to be polite, Wilma very coldly shoots down her husband's secretary. Matters are then made worse when Miss Stone slowly walks out of the room, as Fred cannot help but lustfully stare at her butt, infuriating his jealous wife even more.

After Fred goes on the run from the police once Cliff's plan succeeds, Miss Stone begins feeling guilty, possibly because of actually devolving true feelings for Fred while she was seducing him. She later helps Fred stop Cliff and then turns evidence proving Fred's innocence over to the police, but is arrested as Cliff's accomplice. Fred promises her that he'll tell the police that she helped him, possibly getting her a lighter sentence. She responds by telling Fred that she enjoyed being "bad" with him, and then winks at him while he wishfully stares at her gorgeous body one last time, clearly not over his attraction to her. 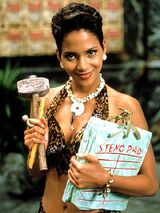 Add a photo to this gallery
Retrieved from "https://femalevillains.fandom.com/wiki/User_blog:Doalfe/Sharon_Stone_(The_Flintstones)?oldid=147859"
Community content is available under CC-BY-SA unless otherwise noted.