Start a Wiki
Samantha D'Bonne (Lysette Anthony) is the main antagonist in the 1993 comedy film "Look Who's Talking Now".  This is the thrid in the line of the series.  In this film, it is the pets who do the talking.

James Ubriacco (John Travolta) and his wife Mollie (Kirstie Alley) are struggling to make it, while raising two children on their own.  James has a new job as a corporate personal pilot to a sexy and lonely business woman named Samantha.  Mollie is not so lucky, as she has lost hers.

Two new additions soon arrive in the family.  The first is a streetwise dog named Rocks.  The second is Daphne, a spoiled pedigree poodle that is given to them by Samantha.  Mollie is especially not pleased with Daphne, since Samantha has something to do with it.  She suspects that James is fooling around with his blonde boss and a jealousy triangle ensues.  She demands that James get rid of her.

Samantha has the hots for James, and does everything she can to make him interested, despite knowing he is married.  She has him fly places she doesn't need to go, and stay longer on business trips than is needed, just to try to seduce him.

The marriage between James and Mollie becomes endangered because of Samantha.  Mollie begins having nightmares of James dancing with Samantha is a long green dinner dress.

In this scene,  Mollie zaps a couple sitting at a table nearby, and they disappear.  She says to James, "Honey what are we doing?".  James responds that he doesn't know.  Mollie than asks, "Do you think we're dreaming?"  James answers, "I think it's one of those dreams were you know you're dreaming".  Mollie then asked, "Does this mean we can do whatever we want to do?  James responds "Yes", just as Samantha shows up in the same green dinner gown from Mollie's nightmare and grabs James around the shoulder.  Samantha says, "Excuse me, we were having an affair".  Mollie brushes James asside, and then pushes Samantha back.  She then blows a kiss toward Samantha and she takes a step further back.  All of the sudden, she begins to disappear, and there is a look of impending doom on Samantha's face.  When the last little bit is showing of Samantha, two silicone breast implants drop to the floor from the area of her chest.  Mollie turns to James and comments, "See I told you they weren't real".  Both James and Mollie take one last look at the boob implants on the ground, and with satisfied faces, they turn and begin dancing together and the dream ends.

Finally during Christmas Eve, she develops a plan for James to be away from his family.  After Mollie gets upset, she packs up the kids and the dogs and take a taxi to the North Woods where James is located.  Samantha even forges a note from the cabin's owner saying he won't be back in time for their business meeting.  Then she cut off the phone lines.  Last but not least, James become held captive in a snowbound cabinwith the sex-starved bombshell.

Mollie's taxi skids off the road and savage wolves attack the stranded family.  Luckily, the two dogs fight the wolves off.  While Samantha is happily dancing with James, he suddenly notices the phone unplugged and drops her hard on the ground. James is angry and berates Samantha for her actions. Samantha says that James deserves better than Mollie who to her is "a frumpy little housewife who hasn't got the foresight to find herself a decent job".

Suddenly Rocks makes it to the cabin and James decides to leave to be with his family. Samantha says spitefully that if he leaves, she will make sure that James never flies for an airport again. Her threat is cut short when Rocks urinates on her foot. James turns and leaves. Samantha picks up a vase of flowers and hurls it at James, but she misses and it hits the now closed door. We don't see Samantha again after this. 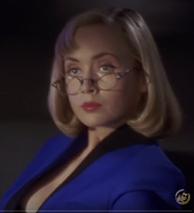 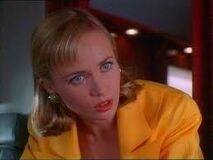 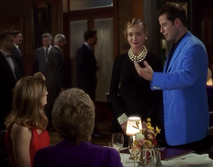 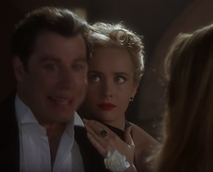 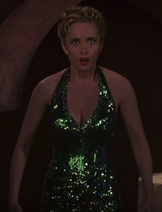 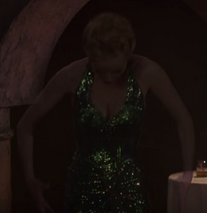 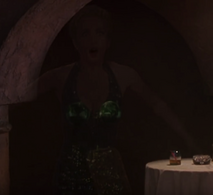 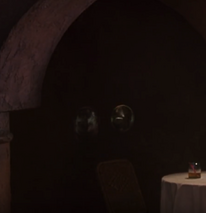 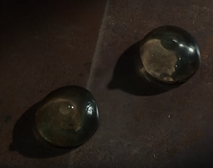 Add a photo to this gallery
Retrieved from "https://femalevillains.fandom.com/wiki/User_blog:Doalfe/Samantha_D%27Bonne_(Look_Who%27s_Talking_Now)?oldid=170910"
Community content is available under CC-BY-SA unless otherwise noted.