Rita was a secondary antagonist in the 1976 episode "Beauty on Parade" of the TV series "Wonder Woman". Rita was played by the late actress, Christa Helm.

Rita was one of the contestants in a beauty pageant. She was vying from the title "Ms. G.I. Dreamgirl 1942" which took place at Fort Russell, a military base during World War II (1942). The contest was organized to help bolster the moral of the troops. There was a concern that the Nazi's may have been plotting to steal or destroy the top secret radar system. As a result, Diana Prince (Wonder Woman) was asked to enter the contest to have someone on the inside to see if any funny business was going on in the troupe. There were a couple of people of suspicion on the payroll of the contest, and it was Diana's job to check hem out.

Besides an opening scene where all the girls were shown on an outside stage promoting the upcoming event, we first see Rita at a rehearsal. She is wearing a black and white satin outfit complete with black hot pants. She had blonde hair which for this portion of the show is pulled back. Rita berated a fellow girl, Mitzie (Paulette Breen) for messing up her performance, and quickly establishes herself as the queen bitch of the contestants.

When Diana walked into the rehearsal, all eyes were on her. She had assumed the name Diana Paradise to enter the contest. Rita was extremely jealous when Diana showed up to enter the contest, and you could see the daggers forming in Rita's eyes. She felt threatened, because she thought she would have been a shoe-in to win the title without her there.

Diana had to sneak out of the pageant barracks in order to save Maj. Steve Trevor (Lyle Waggoner). It is Rita who noticed she was gone and reported it to the live in stage director and "den mother" Lola Flynn (Anne Francis), hoping it would disqualify her. She also discovered that Diana has been wearing a red wig, and exposed that in order to humiliate her as well. All the girls gathered in the barracks, and about that time, Diana emerged from the shower wearing only a towel wrapped around her body. That puts the issue to rest. Diana calmly grabbed her wig from Rita, and played it off as a no big deal. Everyone was satisfied except the still jealous Rita.

We soon learn that Lola and Monty Burns (Bobby Van), the pianist and music director for the pageant, were up to no good. They were seen talking about not only the radar system, but were also planning a plot to kill Gen. Dwight D. Eisenhower, who it was said may be attending the pageant.

During the performance, there are a number of catty exchanges between Rita and Diana. One of these is during the swimsuit portion of the competition. Rita is wearing a silver one piece, and when the two of them are lined up, Rita tries to intimidate Diana, saying that Diana doesn't stand a chance at winning the contest.

Rita was even more furious with Diana, who had now it seems become the favorite of Jack Wood (Dick Van Patten). Jack was the host of the pageant, and was a "Bob Hope" type radio comedian of the era. Diana had been awarded the role of magician's assistant to Jack Wood for a performance during the pageant, and that meant that Rita wouldn't be able to wear the sexy outfit she had thought was hers. Instead, she would be wearing a purple sun dress and bonnet that didn't flatter her figure the way the short black shiny skirt with pink accents did.

Monty intended to go up in the rafters to loosen the stage lights to fall on Diana as she performed as Jack's assistant. This was due to the suspicions that Monty had over the mysterious background of Diana, and the sneaky questions she kept asking on stage. Monty planned to eliminate the loose ends and keep his plan alive. Lola tried to stop him, but he locked her in the disappearing box to keep the plan alive. After Diana freed Lola from the box the magician's act was coming up next. Rita being the devious sneaky bitch she was, albeit a very gorgeous one at that, snuck into Diana's dressing room and stole her magician's assistants outfit and put it on during the actual performance. She squeezed past the other entrants backstage including Diana. Lola and the other girls were shocked and outraged at the gall of Rita as she pranced onstage to take her cue with Jack. Lola was more worried that Monty would not notice the switch, and drop the lights on the wrong girl. However, she was more afraid to say anything because it would expose her as an accomplice. Diana just shrugged and acted like the gracious contestant, oblivious that she had been saved from a terrible accident. When Jack saw Rita, he was also shocked, but decided the show must go on. Rita showed off her beautiful legs in the dark stockings and black high heels while completing the act.

Diana suddenly noticed that Monty was up in the rafters rigging the stage lights. At the last second, Diana twisted into Wonder Woman and raced on the stage to catch the falling lights just prior to them crushing the lovely Rita. Wonder Woman then raced out of the show to Point Lobo to intercept Monty and his men. They were awaiting the car of Gen. Eisenhower. When Monty shot off an RPG, Wonder Woman intercepts it and threw it back.

With the bad guys detained, she appeared back at the pageant, this time still dressed as Wonder Woman. Because of her heroism, Wonder Woman was selected as Miss G.I. Dreamgirl 1942, and all the contestants including Rita were good with it. Little did Rita know that Diana and Wonder Woman were one in the same. 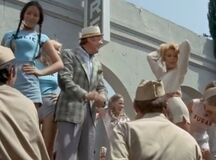 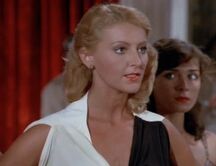 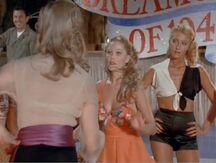 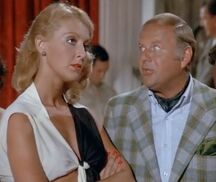 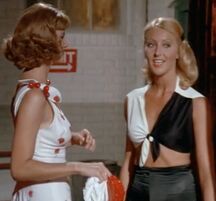 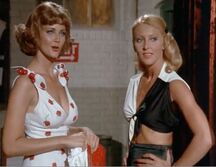 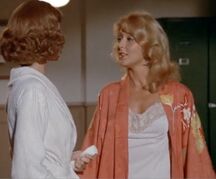 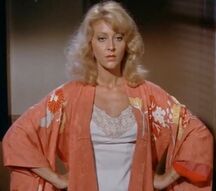 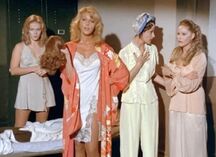 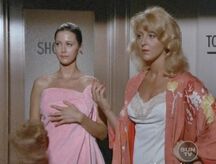 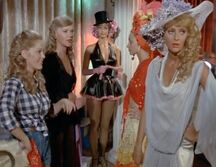 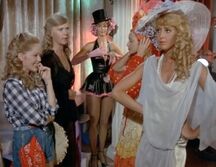 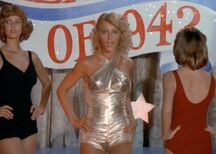 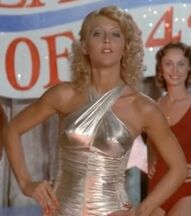 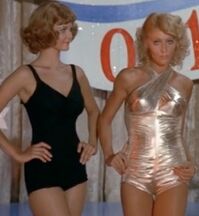 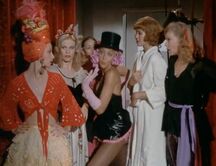 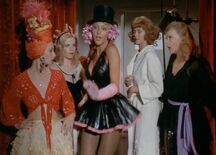 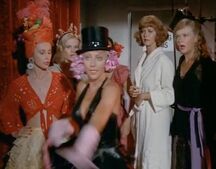 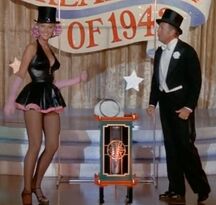 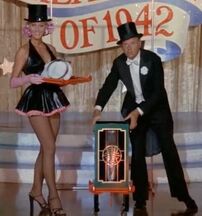 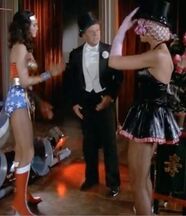 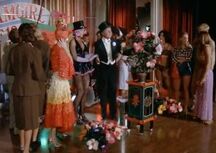 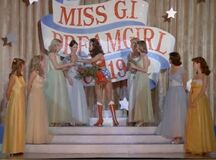 Add a photo to this gallery
Retrieved from "https://femalevillains.fandom.com/wiki/User_blog:Doalfe/Rita_(Wonder_Woman)?oldid=171149"
Community content is available under CC-BY-SA unless otherwise noted.