At the beginning of the film, Queen Morganna is residing over the ceremony in which her tribe of amazons are sacrificing a virgin (Becky LeBeau) who is tied up on posts.  The High Priestess (Nikki Fritz) performs the ritual, and the ceremony is interupted when a large dinosaur is summoned and eats the virgin.

Next, Capt. Jason Briggs (Ross Hagen) is transporting three army deserters for a court martial when the plane has engine trouble and crashes into the ocean.  They wash ashore on an uncharted island in the Pacific, and find they are among a primitive society of cave women who routinely sacrifice virgins to appease The Great One, the top dinosaur on the island.

The men are brought before Queen Morganna, who sentences the men to a labor camp.  However, the three amazon women ordered to carry out her sentence, April (Antonia Dorian), May (Griffen Drew), and June (Michelle Bauer) begin to be attracted to the three army deserters.

One of the men has a smiley face tatoo on his arm, and the girls mistake the symbol to be that of story of the gods.  When they bring the news to Morganna, she dismisses it, but tells them they must kill the Great One, or face death.

The three girls fall in love with the men, and the men go before Queen Morganna to ask for her blessing in allowing them to marry.  Morganna refuses.  Morganna tells the men that the three girls are next in line for the altar.  In other words, they are next to be sacrificed to The Great One, unless they can stop the famine that has plagued their land.

In order to save the men, June challenges Queen Morganna to a fight.  If June loses, she and the other subordinates will be put to death.  June is able to knock Morganna out, and save herself.

Queen Morganna, then summons Capt. Briggs to her tend, and tells him of a crate that washed ashore many years ago, containing weapons and a radio.  She had the items buried, and gives him the map to find it, if he will agree to leave the island along with the rest of the men.  He agrees, and finds the crate.

Armed with the new weapons, the men confront the dinosaur and blow him up with one of the handgrenades.  They now have killed the dinosaur responsible for terrorizing the tribe, and the food drought is over as well.

At the end of the film, Queen Morganna performs the marriage ceremony of April.  She then asks Capt. Briggs to stay and become her king. 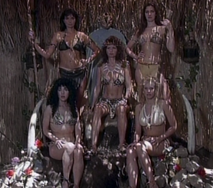 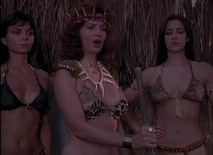 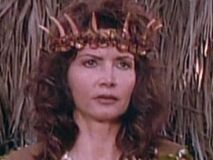 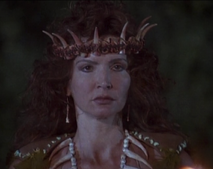 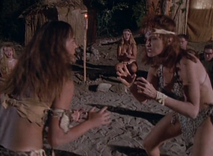 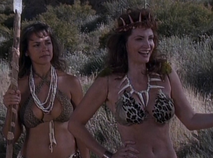 Add a photo to this gallery
Retrieved from "https://femalevillains.fandom.com/wiki/User_blog:Doalfe/Queen_Morganna_(Dinosaur_Island)?oldid=194693"
Community content is available under CC-BY-SA unless otherwise noted.