Start a Wiki
Pussy Galore (Honor Blackman 1925-2020) is a major antagonist in the 1964 James Bond film “Goldfinger”.  The character was adapted from author Ian Fleming’s 1959 novel by the same name.

Pussy Galore was the personal pilot for gold smuggler Auric Goldfinger (Gert Frobe), and the leader of a female aviator team called the Pussy Galore’s Flying Circus, who is in the employ of the billionaire. However, Pussy and the other members of this faction are involved in Goldfinger's "Operation Grand Slam".  This plan calls to infiltrate For Knox, being in charge to dispensing the Delta 9 nerve gas across the air of the bank in order to kill 60,000 people.  The women aviators include: Aleta Morrison, Maggie Wright, Lesley Langley, Marian Collins, Caron Gardner, Jane Murdoch, Tricia Muller, Jane Holland, and Maise Farrell.

Goldfinger and his task force (led by Oddjob and Kisch) to smuggle an atomic bond (created by Mr. Ling) into the vault. Such an action would make the gold radioactive and useless for 58 years, and that the value of Goldfinger's gold would increase many times, thus making Goldfinger the richest man in the world.

Pussy Galore first appears as the pilot aboard Goldfinger's private jet where James Bond (Sean Connery), unconscious after being shot by Kisch with a tranquilizer gun, wakes up to see Pussy standing over him. After introducing herself, the woman informs him that he is not dead, and that he was merely shot with a tranquilizer gun. She threatens to use it again, suggesting that he instead relax, have a cocktail, and enjoy the flight.

When the plane lands, Pussy escorts Bond to Goldfinger's stud farm in Kentucky where they see the Flying Circus pilots. Galore assures them that they will get their assignments tomorrow night. She then dismisses them for the day before transporting Bond to Goldfinger's ranch and locking him into a cell. However, Bond manages to escape, and overhears Goldfinger discussing Operation Grand slam with a group of American gangsters, learning of the plot. Pussy catches the spy and pulls his legs out from under him, putting him back in his cell.

Later on, as Goldfinger is having some mint juleps with Pussy, he notices two men with binoculars spying on the farm. He realizes that they must be friends of Bond, and decides to invite the British for a drink, so that everything will appear friendly, as if Bond were out of danger. He tells Pussy to bring 007 out of his cell and entertain him. After a brief drink, Pussy takes Bond into a barn to keep up the pretense. Bond however, tries to seduce her into foiling Goldfinger's plan, and Pussy uses judo to trip him. The two engage in an entertaining judo back and forth, and eventually Bond gets the upper hand, and the two kiss.

Pussy turns against Goldfinger and has the Flying Circus replace the nerve gas with a harmless one while alerting the U.S. government about Goldfinger's plan, arranging for soldiers at Fort Knox to fake being gassed, so that Goldfinger can be baited and captured.

After Bond and his American allies have managed to deactivate the bomb and therefore thwart Goldfinger's plans, Pussy is forced to serve as a pilot of a plane that 007 boarding to meet with the President at the White House and that Goldfinger has taken over in order to kill him personally. Fortunately, Bond manages to kill Goldfinger by sending him through the window after the cabin is depressurized before escaping with Pussy using a parachute. While Galore tries to wave to the helicopter looking for them, Bond dissuades her and sleeps with her under the parachute.

It is unknown what happened to Pussy after this. She was possibly arrested for his involvement in Goldfinger's plot, although it is not confirmed. 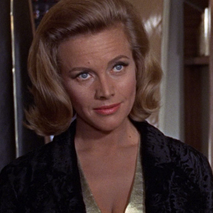 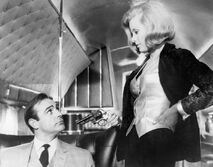 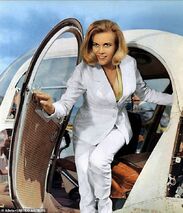 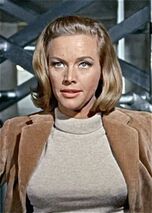 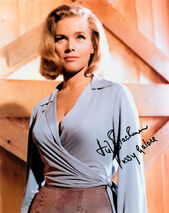 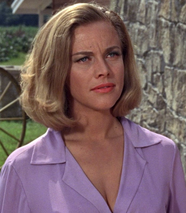 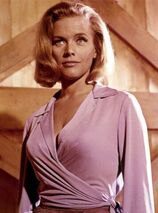 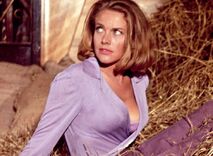 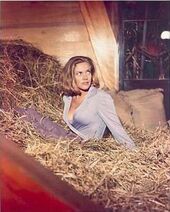 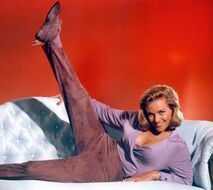 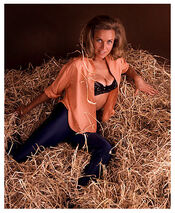 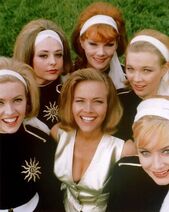 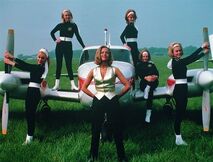 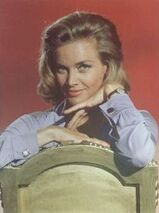 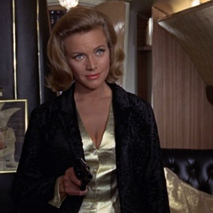 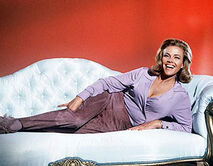 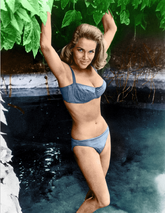 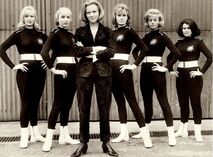 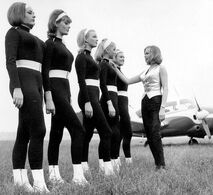 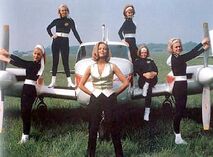 Add a photo to this gallery
​​​​​​
Retrieved from "https://femalevillains.fandom.com/wiki/User_blog:Doalfe/Pussy_Galore_(Goldfinger)?oldid=197786"
Community content is available under CC-BY-SA unless otherwise noted.