Start a Wiki
Princess Elaine (Judi Meredith) is the princess turned evil through a spell in the 1962 fantasy adventure film "Jack the Giant Killer".

Princess Elaine has just been crowned in Cornwall when she receives a magical music box with a small anthropormorphic jester inside as a birthday gift from a foreign lord.  However, the foreign lord is really an evil sorcerer Pendragon (Torin Thatcher).  The tiny jester is Pendragon's giant minion Cormoran.  When Elaine is asleep that night, Pendragon uses his magic to turn Cormoran back to his full size and abducts Elaine.

Elaine is taken to Pendragons ship, but before it can sail, a brave farmer named Jack (Kerwin Matthews) rescues her.  In gratitude, King Mark (Dayton Lummis) makes Jack Elaine's protector and entrusts her to safely guide her to a convent across the sea.

Unfortunately, Elaine's waiting-maid, Lady Constance (Anna Lee) is actually a witch who is in league with Pendragon.  Constance reveals Pendragon's plan to Jack.  Having his plan foiled, Pendragon comes up with an alternative one.

While Jack and Elaine are on their trip, they begin to fall in love.  Pendragon sends his demonic witches to intercept Jack's ship.  In the chaos, the ship's captain (Robert Gist) is murdered and Elaine is captured again.

At his castle, Pendragon uses his powers to turn Elaine into an evil witch.  Pendragon then returns to Cornwall and confronts King Mark, telling him he has one week to renounce the throne and allow Elaine to rule alongside Pendragon, or she will die.  After he vanishes, Mark realizes Constance has betrayed him, and when she stands before a mirror, she appears as a witch.  King Mark then breaks the mirror, thereby freeing Constance from Pendragon's power.

In the Sea, a friendly old Viking named Sigurd (Barry Kelley) rescues Jack and Peter (Roger Mobley) and introduces them to the imp (Don Beddoe), a leprechaun imprisoned in a bottle by the king of the elves for crafting seven-league boots from his pot of gold.  The imp explains that his three remaining gold coins can each grant a wish to an honest man.  Jack can use them if he will break open the bottle and free the imp.

With the first two wishes, Jack manages to approach Pendragon and coerce him into giving Elaine back.  However, he is unaware that she has been transformed and now holds allegiance with Pendragon.  Upon their return journey, Elaine disables Jack with a sleep potion, but when she touches the imp's bottle, it grows hot because of her evil nature, causing her to accidentally cast it into the sea.

Pendragon captures Jack and his friends and attempts to make him tell the whereabouts of the leprechaun by turning Peter and Sigurd into a chimpanzee and a dog.  When Pendragon cannot force Jack's compliance, he leaves him with Elaine, who finally reveals her witch form to him.  With Peter and Sigurd's aid, Jack manages to break free and smash Elaine's mirror reflection, restoring her to normal.

Jack is able to kill Pendragon who had been transformed into a dragon.  As a result the castle was destroyed, crushing Garda, the hobgoblins and witches.  Sigurd and Peter were restored to human form, and Jack then freed the imp. 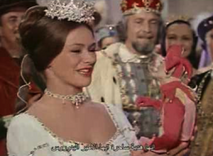 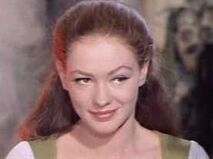 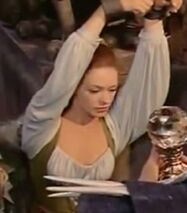 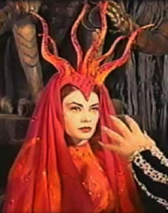 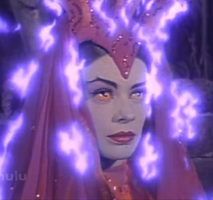 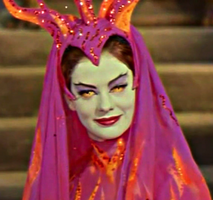 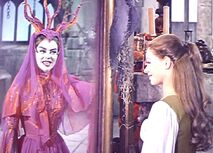 Add a photo to this gallery
Retrieved from "https://femalevillains.fandom.com/wiki/User_blog:Doalfe/Princess_Elaine_(Jack_the_Giant_Killer)?oldid=166260"
Community content is available under CC-BY-SA unless otherwise noted.