Princess Aura is the daughter of the main antagonist in the 1980 scifi film "Flash Gordon".

Princess Aura is first seen hiding herself somewhat from view as she gazes seductively upon Flash Gordon (Sam J. Jones) as he stands in the Grand Audience Chamber of her father, Emperor Ming the Merciless (Max von Sydow). After Flash insults her father by calling him a psycho, Aura appears and walks alongside the earthlings at a distance, leading her dwarf ‘pet’ Fellini on a golden chain. She moves to stand upon the dais near her father and Klytus (Peter Wyngarde). Like the others of Mongo, Aura is enthralled when Flash rebels against Ming’s brutes to save Dale Arden (Melody Anderson), watching in appreciation as Flash battles them until he is knocked out, at which point Aura asks Ming not to kill Flash right away because she wants him. Ming wonders what Prince Barin (Timothy Dalton) would say to this and Aura assures her father she can handle Barin. Ming refuses and orders Flash executed.

Afterward, Aura and Barin are seen in a darkened area overlooking the Execution Chamber. They kiss and Aura tells Barin to fly back to his kingdom, that he will see her sooner than he thinks. He does not believe her, but she assures him she will show up if he rockets there right away. Afterward, she is with her father at Flash’s execution. When the Imperial Surgeon faces them and bows, Ming asks her if she enjoyed herself on Sybaria with the doctor, and that Klytus gave him the information. Aura merely says that Klytus wants her himself and his agents are always making up lies about her. Soon after, she is amazed to see "water" leaking from Dale’s eyes, which Ming tells his daughter are tears, a sign of weakness.

Once Flash is executed by poison gas, his body lies in a black coffin. Aura and the Imperial Surgeon arrive in the chamber. She tells him to hurry and the surgeon injects something into Flash’s arm on the agreement that he and Aura will see each other again on Sybaria, same place, the following weekend. Aura says she can hardly wait, and the doctor departs quickly. She kisses Flash. He awakens and asks where he is. Aura tells him he is back from the dead, that she saved him. Astonished, Flash gets out of the coffin and Aura gives him a uniform disguise to change into, telling him she likes him a lot. They flee the Imperial Palace, despite Flash’s protests, and head for Arboria where Aura tells him there are people there who will help him.

In the rocket ship, as they fly through the skies of Mongo, Aura teaches Flash how to fly the rocket ship as she attempts to seduce him. They pass the moon Aquaria and are nearing Frigia. She tells Flash that Ming keeps the various peoples of Mongo in a state of war. Flash asks why they do not team up on overthrown him, but Aura does not understand that concept. He resists her seductions and she protests, reminding him that she saved his life. Soon after, a device lowers onto her head as an interested Flash looks on. She tells him she is going to contact Barin and tell him to expect their arrival. Flash asks if he can call Dale on it, but Aura refuses to show him unless he "persuades" her. He threatens to crash the ship into Frigia unless she shows him how to contact Date. As he does so, Aura attempts to seduce him again. They soon arrive in Arboria and land, making their way to Barin’s temple, where they watch the ceremony of the Wood Beast. She greets Barin afterward and reveals she wants Barin to keep Flash for her until Ming has had his way with Dale Arden. Barin refuses and wants Flash killed, but Aura threatens that Barin will never have her again if he does so. She leaves Flash in Barin’s care.

She is captured when she returns to the Imperial Palace and taken to the Torture Chamber, where she is whipped by General Kala (Mariangela Melato) and interrogated by Klytus as to whether or not she is the one who saved Flash Gordon. Although very tough willed, Aura seems terrified by the idea of Bore Worms being put on her. She demands to see her father Ming about Klytus’ actions and is shocked to see Ming watching from behind a privacy screen. She curses at him when Ming refuses to stop the torture. She confesses off-screen and Ming plans to banish her to Frigia the day after his wedding for a year in a cavern of ice and then marry her to Klytus.

She is next seen on her way to the bedroom chamber of Ming, where Dale is being prepared for her wedding. Aura does not want the guards to touch her but they throw her onto the bed and Dale attacks her. A catfight ensues, but Aura pleads with Dale to stop and that she will be exiled in the morning. Dale thinks it is another trick, but Aura’s tears convince her. She gives Dale a poison to kill Ming, but Dale refuses saying she gave her word to be a good wife if Ming spares Barin and Zarkov, which Ming said he would. Aura protests Ming has never kept a vow in his life, but Dale refuses to poison him, choosing to be the better person by keeping her word. Aura hugs Dale as they fear all is lost.

As she is in a lift tube with her guard, Aura slips her cape off and asks the guard to pick it up. As the guard does so, she pulls long needles from her belt and kills the guard, rushing to free Barin and Zarkov before they are executed. She destroys the surveillance cameras and tries to get them out, but her power ring does not open the lift they come to. She attempts to convince Barin she has changed, but has to run off to the wedding, despite his marriage proposal, or she will be shot. Aura, stubbornly, is present at the wedding with a rebellious Fellini being led along by the guards. She reaches out to comfort Dale as Dale passes by.

In the finale, Aura is seen hand in hand with Barin as he is proclaimed the new King of Mongo. 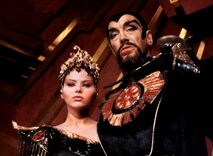 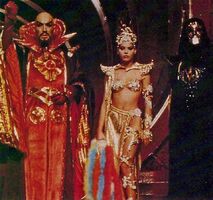 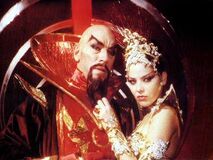 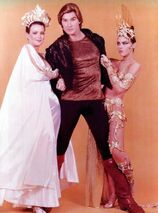 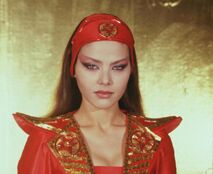 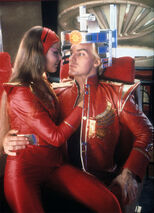 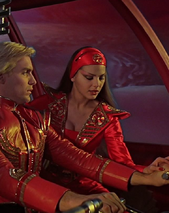 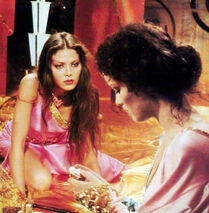 Add a photo to this gallery
Retrieved from "https://femalevillains.fandom.com/wiki/User_blog:Doalfe/Princess_Aura_(Flash_Gordon)?oldid=76798"
Community content is available under CC-BY-SA unless otherwise noted.
FandomShop DC Trivia GalaxyQuest