Start a Wiki
Patricia Whitmore (Catherine Zeta-Jones) was an antagonist in the 2012 comedy musical film "Rock of Ages".

Patricia Whitmore is the wife of mayor of Los Angeles, Mike Whitmore (Bryan Cranston).  During her youth, Patricia was a rock and roll fan, and became a groupie of Stacee Jaxx (Tom Cruise) when he was at the beginning of his musical career.  Stacee and Patricia had a brief romance.  Stacee quickly left her and Patricia never forgot about the betrayal.

Patricia made the center of her husband's re-election campaign, to get rid of rock clubs, rock stars and the rock style of life in the city.  She rallied a group of conservative and religious organizations to demonstrate in front of the rock club "The Bourbon Room", which was the site of an upcoming Stacee Jaxx concert.

Before the concert, Stacee recognizes Patrica and approaches her.  He seduces her once again, and then walks away.  Lonny (Russell Brand), one of the workers of the club recognizes Patricia from an album cover and exposes her to the public on TV for her part as a groupie.  This exposure humiliates Patricia and the demonstration is a bust.

At the end of the film, Stacee Jaxx performs on stage with Drew Boley (Diego Boneta) and Sherrie Christian (Julianne Hough), where Patricia is in the crowd.  Patrica has gone back to her rock style as she is wearing black leather and fishnet stockings. 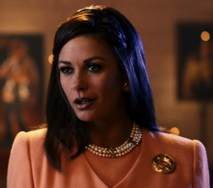 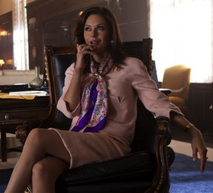 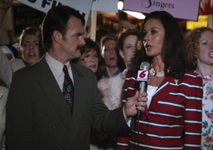 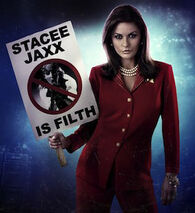 Add a photo to this gallery
Retrieved from "https://femalevillains.fandom.com/wiki/User_blog:Doalfe/Patricia_Whitmore_(Rock_of_Ages)?oldid=176488"
Community content is available under CC-BY-SA unless otherwise noted.