Start a Wiki
PallaPalla is the second oldest member of the Amazoness Quartet and works for the Dead Moon Circus. This is the original depiction of the character created by Naoko Takeuchi.

PallaPalla has light blue hair in a bun, light skin and blue eyes. She wears a blue one piece bikini split into three circles with darker blue balls in the centres. Her bikini is rimmed at the bottom with an orange skirt, she has many ball decorations on her such as her necklace, bracelets, on her sandals and a major part of her headpiece. She is the shortest member of the Amazon Quartet.

In the manga, her and the rest of the Quartet were reverted to their Amazon Stones and she was discovered to be Sailor Pallas, one of the four protectors of Chibiusa.

Her name is derived from Pallas, one of the four major asteroids in the Asteroid Belt, keeping to the theme of our Solar System.

The name Pallas can have its roots in multiple Greek words, such as pallo (to brandish [a spear]) or palladion (any place that grants safety). But all of these words and meanings link the name to the Greek goddess of wisdom, Athena. 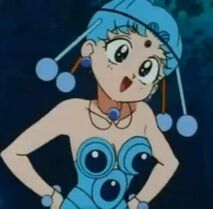 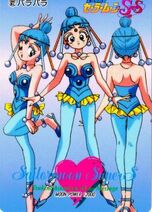 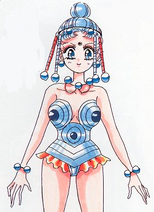 Add a photo to this gallery
Retrieved from "https://femalevillains.fandom.com/wiki/User_blog:Doalfe/PallaPalla_(Sailor_Moon)?oldid=116060"
Community content is available under CC-BY-SA unless otherwise noted.