Start a Wiki
Neila (Grace Lee Whitney) was a redeemed moll in the 1967 back-to-back episodes "King Tut's Coup" and "Batman's Waterloo" for the TV episode "Batman".

After a blow to the head, Yale Universty professor of Egyptology once again believes he is King Tut (Victor Buono).  This was King Tut's second appearance of the season.

Neila was Tut's girl and moll in the episode.  That was until Tut became obsessed with Lisa Carson, which we will see here later.

Tut's first order of business is to steal a sarcophagus from the Gotham City Museum's Egyptian section.  When Batman (Adam West) arrives on the scene, Tut has left a note for him to find, which translates that he will claim his own.  Batman figures that the Egyptian ball that Bruce Wayne has organized will be a target.

Lisa Carson (Lee Meriweather), the daughter of multimillionaire John E. Carson, arrives at the party dressed as Cleopatra.  Tut and his men kidnap Lisa after engaging in a dance.

Batman and Robin (Burt Ward) track Lisa to Tut's headquarters, where she has been thrown in the dungeon.  Batman is captured and placed in a sarcophagus, which is suspended over a pool.  Robin is tied up as well along with Lisa.

Lisa finally agrees to marry Tut, but only if he calls her father.  Tut does just that, and promises to keep her safe if Carson pays him eight million, which accounts for the mortgage payment on the pyramids for the last three millennia.

Robin and Lisa are tied to a pole in the royal oil boiling room while Tut waits impatiently for the oil to heat up.  Neila, who is upset with having Lisa as competition, frees Robin and Lisa, but is caught before they can escape.  As a result, she joins them as Tut's captors.

Just as Robin's about to be tossed into the boiling oil, Batman bursts in, tossing a chemical compound into the oil that turns it into foam rubber.  A fight takes place, during which Tut is clubbed on the head, reverting him to his good teacher self. 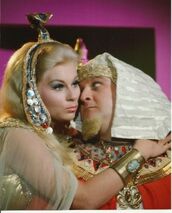 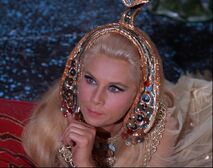 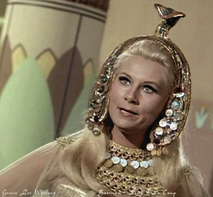 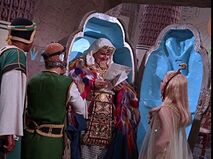 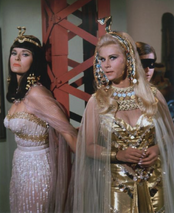 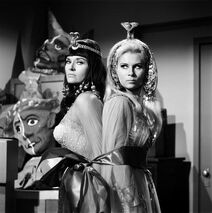 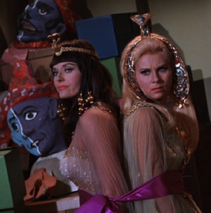 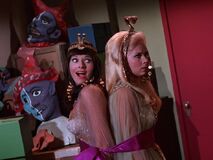 Add a photo to this gallery
Retrieved from "https://femalevillains.fandom.com/wiki/User_blog:Doalfe/Neila_(Batman)?oldid=116939"
Community content is available under CC-BY-SA unless otherwise noted.