Nancy Pi Squared (Dee Hartford) is the showman's agent to Mr. Farnum in the 1968 episode "Space Beauty" for the TV series "Lost in Space".

Farnum (Leonard Stone), comes back in this episode looking for contestants for a beauty pageant: Miss Inter Galaxy Beauty Pageant, to be exact. He comes for the eldest daughter, Judy Robinson (Marta Kristen), looking to coerce her into entering the contest. Nancy is Farnum's theatrical agent, and is ordered around by Farnum almost like a slave would be. She also had genuine feelings for Farnum, and seemed hurt when he routinely ignored her. Nancy is dressed in a a short pink and orange mini skirt dress with orange colored tights and orange boots. Her brunette hair is braided and put up in a beehive style. The audience later learns that Nancy sold Farnum's soul in order to secure the Beauty Contest contract.

In order to enter the contest, the girls must submit a photograph and sign a contract. For each contract signed, Farnum receives gold coins, so he and Nancy are both rewarded for bringing in talent for the pageant. Judy senses something wrong and decides not to enter. As usual, Dr. Zachary Smith (Jonathan Harris) has other plans as he’s looking out for himself.

Dr. Smith eventually gets Judy to join, even going so far as getting her to sign the contract. It’s eventually revealed that signing the contract reveals that the winner of the beauty contest is actually meant to be handed over to a being made entirely out of fire. This being is named the Dictator and benefactor, and he hails from a planet that doesn’t have anything beautiful on it.

Maj. Don West (Mark Goddard) is shocked when he reads the fine print of the contract. However, he is too late to prevent Judy from winning the contest. After Judy wins, the Robinson's and the Jupiter 2 party escape Farnum's ship. The Dictator and two knights follow them. Judy is possessed with a sort of hypnotic spell, and is on the verge of being drawn away from Jupiter 2. The Dictator's nature is revealed when he holds out his hand. He is made of living flame, but Judy is unable to resist his summons. At that moment, snow begins to fall, extinguishing the Dictator and freeing Judy from his grasp.

Farnum and Nancy leave the planet after the Dictator is eliminated. 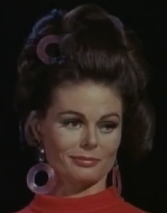 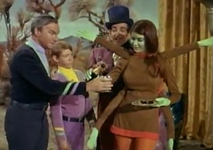 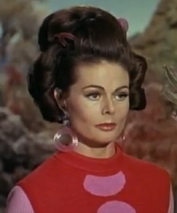 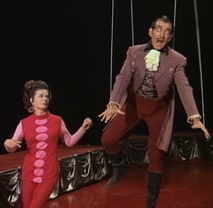 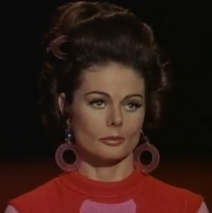 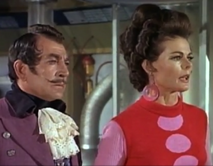 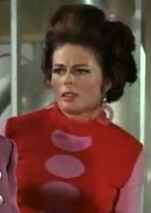 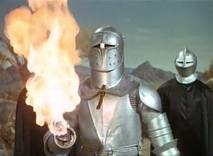 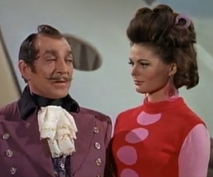 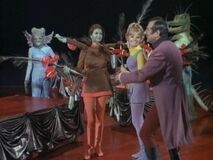 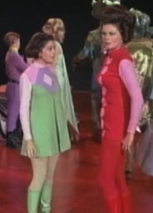 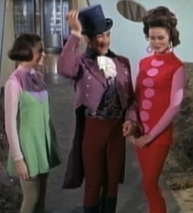 Add a photo to this gallery
Retrieved from "https://femalevillains.fandom.com/wiki/User_blog:Doalfe/Nancy_Pi_Squared_(Lost_in_Space)?oldid=120116"
Community content is available under CC-BY-SA unless otherwise noted.