Nancy (Jeannie Wilson) is an evil robot in the 1977 two-part episode of "Fembots in Las Vegas" for the TV series "The Bionic Woman".

Jaime Sommers (Lindsay Wagner) first noticed the presence of another fembot while backstage at a Las Vegas show.  She discovered that Tami Cross (Melinda O. Fee), the girlfriend of Rod Kyler (James Olson), had been replaced with a fembot.  Tami was posing as a Las Vegas showgirl.

Jaime is then taken on by a army of fembots inside the casino.  There is Gina (Nancy Bleieir) who is serving as a cigarette girl, Billie (Lorna Sands) a black jack dealer, and Peggy Callahan (Jennifer Darling) who is working as a pit boss.  These three fembots were concerned with security and taking out Jaime.

Nancy on the other hand, was used as a mole in the military.  She poses as an Air Force Lieutenant in order to steal the Directed Energy Ray Weapon to be used by Carl.

After that was successful, Nancy was seen as Carl's assistant and operative at the control panel in his operating building.  Here Nancy was dressed in a blue jumpsuit.

While Nancy began the countdown of the firing of the weapon, Jaime was able to leap over the other fembots and escape.  Oscar used this time to lock Carl in a closet, and then he took out Nancy who was at the control panel.

Gina and the rest of the girls began stalking Jaime in a warehouse.  Jaime was able to locate the real Tami Cross and the real Peggy Callahan, who Carl had locked away.  Gina and Ellen Andrews (Lisa Moore) another fembot took on Jaime.  Just as they were about to engage in a fight, Oscar took out the fembot control at the control panel.  Gina and Ellen were frozen in place in mid punch.  Nancy and the rest of the fembots were frozen as well.

When Jaime made it back up to the control room, Carl had a gun pointing at Oscar.  It was revealed that he was also a fembot, and he ripped off his mask.  The real son had died very young, and his father had created a robot son, giving him a soul.  The robot Carl chased after Jaime, and she led him to a ledge, where she pushed him over the rail and down a two-hundred foot fall.  Carl was destroyed.  Jaime, Oscar, Tami, and Peggy all made it to safety before the whole building blew up.  All of the fembots were destroyed inside. 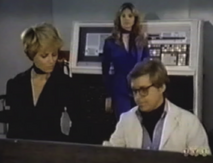 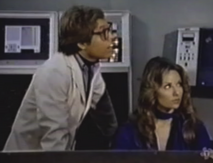 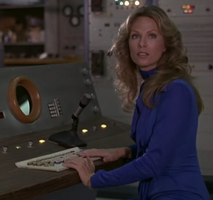 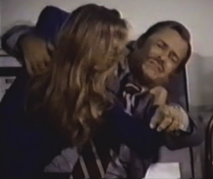 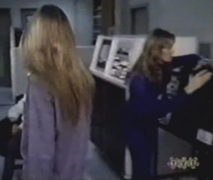 Add a photo to this gallery
Retrieved from "https://femalevillains.fandom.com/wiki/User_blog:Doalfe/Nancy_(The_Bionic_Woman)?oldid=113093"
Community content is available under CC-BY-SA unless otherwise noted.
FandomShop Newsletter Join Fan Lab