Start a Wiki
Naco Saloon Girl (Silvana Bacci) is a minor villainess in the 1968 Italian spaghetti western film, "A Long Ride From Hell".  Although she was unamed in the credits, she was referred to as Glacius several times in the film.

Two Sturgis brothers Mike (Steve Reeves) and Roy set off in pursuit of horse thieves.  While looking for the outlaws they witness a Southern Pacific Railways blowing up, and they are framed by a corrupt sheriff for the crime.  They are both taken to the Yuma Penitentiary for hard labor.

Mike breaks out and begins seeking revenge for the persons involved in the framing and killing of his family.

On one lead he is led to a saloon in Naco, Arizona.  While ordering whisky, he mentions to the bartender that he is looking for a man named Shorty who stole a portion of his gold.  The bartender is unable to give him any information, but Mike notices a saloon girl perk up when the name is mentioned.  The saloon girl then left the bar and headed up stairs with one of the Mexicans for a quick trick.

Mike followed them up the stairs, and upon breaking down the door, both of them were surprised and stripped down to their underwear.  The Mexican attempted to come after Mike, and he picked him up and threw him face first out of the two story saloon.  After looking down, the man landed in a barrel, and had his legs kicking up in the air.

The unamed girl continued to adjust her stockings, and told Mike, that he "could have at least given him time to dress".  Mike proceeded to ask her where Shorty was.  She snapped back, "Who said I know Shorty?"  After handing her a wod of cash, she leaned back on the bed and crossed her legs.  She commented, "I meet a lot of people, you know".  With that Mike handed her some additional money.  She again said, "I'm afraid it's not easy to remember", and Mike handed her another bill.  After tucking the cash into her stockings, she leaned back and said, "Suppose I don't know anything?"   Mike leaned onto the bed, put his hand on her fishnet stockings and began inching toward her upper thigh.  As he began to reach for the money he just handed her, she grabbed his hand and told him she would tell him.  That she knew Shorty, and that he was a pig, he had killed her man in a fight.  She then said that her friend had slashed him across the face from eye to mouth, and was scarred for life.  She continued that he was now in the city of Paradise along with Mae, a girl that she used to work with.

At that moment, the Mexican came back into the doorway and yelled Gringo! and had a knife with him.  Mike punched him and threw him through the balcony, and he went crashing down on the floor next to the bar.  A bar brawl took place between the cowboys and the Mexicans.  This is the last we see of the Saloon Girl. 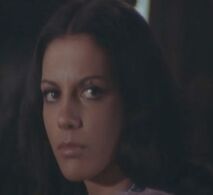 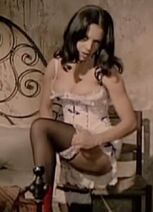 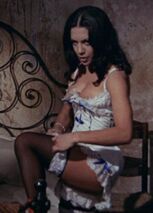 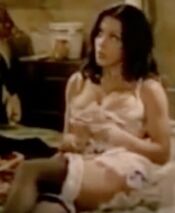 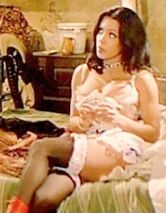 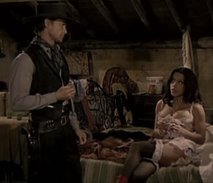 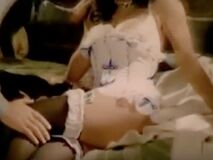 Add a photo to this gallery
Retrieved from "https://femalevillains.fandom.com/wiki/User_blog:Doalfe/Naco_Saloon_Girl_(A_Long_Ride_From_Hell)?oldid=200710"
Community content is available under CC-BY-SA unless otherwise noted.