Start a Wiki
Medusa (Kira Clavell) is a redeemed antagonist in the 2001 fantasy TV movie "Voyage of the Unicorn".

Alan Aisling (Beau Bridges), a professor who is grieving for his dead wife, and his two daughters unwillingly journey to a parallel universe to save the world.

One of their encounters is with Medusa, who attempts to turn them to stone.  However, Alan tells her that she is beautiful after using a lens given to him by a queen.  The lens allows him to look upon Medusa without turning to stone.  He tells her that it allows to see reality rather than the deception.  Medusa, who has been inflicted with pain for turning people to stone down through the ages, offers their freedom if he will give it to her.  After seeing herself in the mirror with the lens, she also sees that her hair is not made of snakes, and her skin is beautiful again.  Medusa allows Alan and her family to leave. 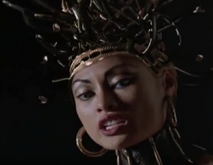 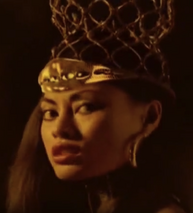 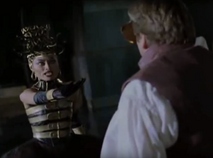 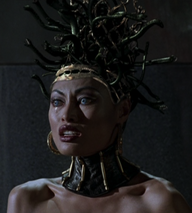 Add a photo to this gallery
Retrieved from "https://femalevillains.fandom.com/wiki/User_blog:Doalfe/Medusa_(Voyage_of_the_Unicorn)?oldid=130172"
Community content is available under CC-BY-SA unless otherwise noted.