Ben Healy (John Ritter) and his son Junior Healy (Michael Oliver) move from Cold River to Mortville, Oregon, a quiet, peaceful community, apparently as a way to start their lives all over again. When Ben is opening an account at the local bank and wishes to be self employed. LaWanda Dumore, the wealthiest woman in Mortville who along with her dimwitted assistant, Smith (Paul Wilson) notices Ben inside her bank from her upstairs office. She demands Smith to find out everything about him since he is bound to be her seventh husband.

Meanwhile, LaWanda looks over Ben's records in her office, but has serious doubts when she sees Junior's, and notices news headlines indicating all the trouble he caused. She decides to handle him in her own way so she can move over to Ben.

Later, Big Ben (Jack Warden) notices Dolly (Krystle Mataras) and Madison (Tiffany Mataras) selling clothes. He finally notices a suit with a "Vote For Big Ben" election button inside it. Then he notices Nippy inside a cage on the table, and the girls then tell him that Junior sold all of his clothes for $10.00. Furious, Big Ben storms into Junior's room and decides to belt him. Junior, however, taunts him with toy nun-chucks. Big Ben charges towards him, but he jumps out of the way and Big Ben falls out the window. Laughing, Junior closes the window, just when Ben comes in and decides to take him out for a day of fun. He asks Junior if he has seen Grandpa (Big Ben) to which Junior replies that "Last time I saw him, he was going out." As the car backs out of the driveway, it is seen that Big Ben landed in a tree, he yells to Ben to no avail. As they drive off, LaWanda and her moving crew show up and notice him up in the tree. Smith thinks he is Ben's father, LaWanda tells him to get him down, but he eventually falls to the ground.

When Junior and Ben arrive home, they find that the house has been wonderfully decorated. They find out that LaWanda was responsible for it. As she begins to leave, she promises Ben she will make dinner tomorrow night. The next day, Junior hypnotizes Nippy so he can scare LaWanda away, but cannot get him out of the trance. When Junior enters his room, he finds that it has been decorated with clowns, the one thing that he despises. Finally having had it, he goes over to his Roach Motel keeper and notices his pet roaches, triggering another plan. At dinner, everyone notices something weird with their salads. Then the bowl of salad tips over and lands all over the table, causing all the cockroaches to land on LaWanda, Ben, and Big Ben. Fed up, an unwitting Ben indignantly reprimands Junior and coldly tells him that he will never trust him ever again and storms out of the room. Next, LaWanda comes in and verbally warns him not to mess with her anymore and tells him she will marry Ben, and then send him to boarding school in Baghdad. He tries to explain it to Ben the next night at his school's open house, but he dismisses it by telling him he cannot be trusted anymore. later ben proposes to LaWanda believing she is the only woman who will marry him.

Junior, who strongly despises LaWanda, gets even by switching her blood sample with that of a rabid dog. While celebrating her engagement to Ben, she gets cake icing on her face, which bears a striking resemblance to foaming at the mouth (a symptom of rabies). As a result, she is handcuffed by animal control officers and sent to the hospital for observation. With her in the hospital, Junior overhears a patient in the room across from her saying he wants to hold the world record for the world's longest nose. Overhearing this, Junior sabotages LaWanda's plastic surgery by switching the patient files, resulting in her receiving a gigantic nose - this is Junior attempting to make her so ugly Ben will not marry her.  Unfortunately, she uses her funds to get last minute surgery to undo the damage.

On the wedding day, Junior continues his antics.  LaWanda is run over by a giant ball, which flattens her to the ground, though unhurt.  At the altar, Junior and Trixie's work pays off and Ben finally realizes that Annie Young (Amy Yasbeck) is the one for him. Big Ben decides to marry (the now single) LaWanda while Junior and Trixie use explosives to splatter the two of them with wedding cake. 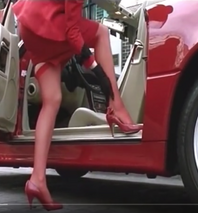 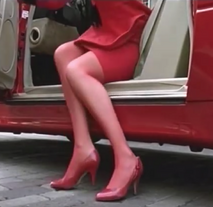 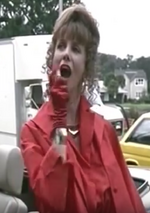 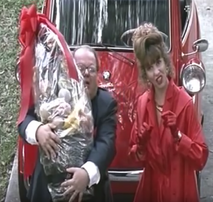 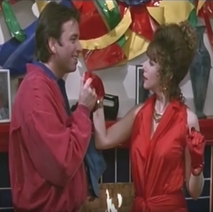 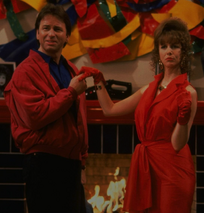 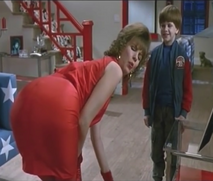 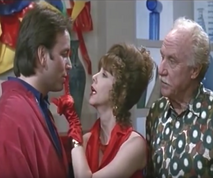 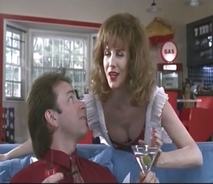 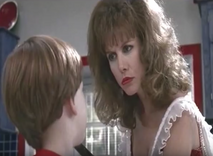 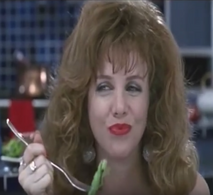 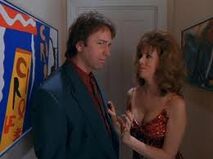 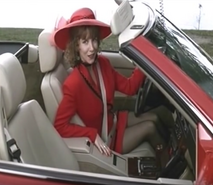 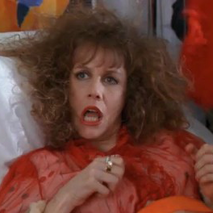 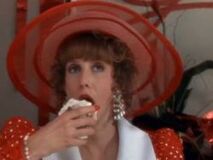 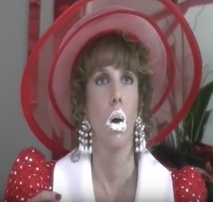 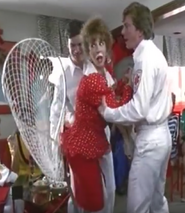 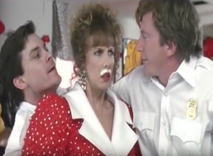 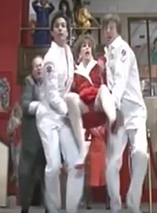 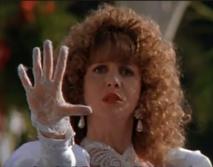 Add a photo to this gallery
Retrieved from "https://femalevillains.fandom.com/wiki/User_blog:Doalfe/LaWanda_Dumore_(Problem_Child_2)?oldid=164685"
Community content is available under CC-BY-SA unless otherwise noted.