Start a Wiki
Kary (Wandisa Guida) is a redeemed secondary antagonist in the 1966 Italian Eurospy film "Operazione Goldman", which is also known as "Lighting Bolt".

Kary first appears in the film, laying out by the pool in a bikini along with Sylvia White (Luisa Rivelli).  Lt. Harry Sennet (Anthony Eisley) arrives, and Kary tells Sylvia to follow him into the bar area. Sennet is an American James Bond-type hero, who is posing as a millionaire playboy.

Later, we find that Kary and Sylvia are henchwoman, who work for Mr. Rehte (Folco Lulli).  Rehte is attempting to interfere with rocket launches using a weapon that he somehow managed to put on the moon.  On the side, Rehte is a beer manufacturer.  The villian is similar to Goldfinger from the James Bond film.

Sennet's boss is the curvy Capt. Flanagan (Diana Lorys).  When the two of them try to infiltrate Rehte's base, they are flooded out in the drain pipe and barely survive.

Next we see Kary shoot an informer who is being interrogated by Sennet and Flanagan.  She gets away withouth them knowing who did the deed.

Kary intentionally runs into Sennet, and she is later told by Rehte to follow Sennet in a vehicle and find a way of killing him.  However, Sennet runs her henchmen off the road and loses her.

Back at Rehte's base, we learn that he is not happy with her failure.  He threatens to kill her father who is being held in a test tube in a lab.  She is given one more chance to capture Sennet.

When Sennet arrives at the base, Kary captures him to bring him to Rehte.  On the way to Rehte, she ends up telling Sennet that she would like to help him, but her father is being held captive and Rehte is threatening to kill him.  Sennet is strapped to a table.  A laser is threatening to cut him in half, and Kary ends up saving him.  However, as they flee, Kary is captured and brought to Rehte.  Rehte kills her father as she watches.  Then he turns the lightning bolt on her and she is electrocuted to death. 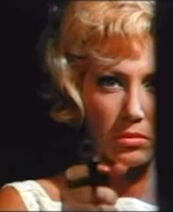 Add a photo to this gallery
Retrieved from "https://femalevillains.fandom.com/wiki/User_blog:Doalfe/Kary_(Operazione_Goldman)?oldid=206893"
Community content is available under CC-BY-SA unless otherwise noted.