Start a Wiki
JunJun is one of the Amazoness Quartet who serve Zirconia and Queen Nehellenia. This is the original depiction of the character created by Naoko Takeuchi.

JunJun has green hair, green eyes and light skin. Her hair is divided into three sections by brown braids. She wears a brown and green bikini top and white baggy trousers with a green and brown panel. Her sandals are green and she has golden bracelets and hoop earring. On her top and panel are three dark coloured shapes that look like phases of the moon.

In the Materials' Collection, she is said to have the darkest skin of the Amazoness Quartet.

She was a member of Amazoness Quartet, who were actually the Sailor Quartet, those intended to protect Chibiusa in the future when Crystal Tokyo was in power. They were still sleeping when Queen Nehellenia sense their power, and used her dark power to corrupt the four Senshi, and they became the Amazoness Quartet. After they were destroyed, Sailor Saturn saved them (and their orbs) when the Dead Moon Circus was crumbling. Later, she asked Neo-Queen Serenity to revive them using the power of the Silver Crystal. They returned to their Senshi forms, and went back into sleeping, waiting for the time where they would be able to protect Chibiusa.

JunJun, now Sailor Juno, along with the rest of the Sailor Quartet, help Eternal Sailor Chibi Moon fight in the Stars arc.

The name Juno can have its roots in multiple Latin words, such as diove (love) or iuvenis (youth). But all these words and meanings link the name to the Roman goddess of marriage and birth.

Like the other members of the Quartet, JunJun owned an Amazon Stone, and hers was coloured green. She performed one attack in the manga called Orb Medicine. 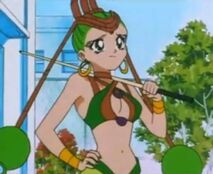 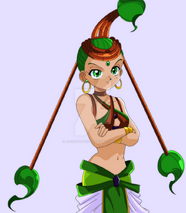 Add a photo to this gallery
Retrieved from "https://femalevillains.fandom.com/wiki/User_blog:Doalfe/JunJun_(Sailor_Moon)?oldid=116062"
Community content is available under CC-BY-SA unless otherwise noted.