Jordan Leigh-Jenson, played by the actress Betsy Russell, appears as the snobby rich girl in the 1983 movie, "Private School".

Jordan is the rival of the lead female girl in the movie, Christine (Phoebe Cates). They both attend an exclusive all-girls private school. Christine is in love with Jim (Matthew Modine) who attends an academy for boys nearby. Since Christine has eyes for Jim, Jordan is also interested in "winning" him for herself. However, she is more interested in splitting them up to spite Christine. She is a rich, spoiled brat, who uses her sex appeal to get what she wants, and she has plenty of that to go around.

Jordan's first "exposure" is where she is dressed in her riding gear on top of her horse, during a dressage class the girls have with the boys. She says some catty stuff to Christine and Betsy while opening her shirt and exposing her bare breasts to Jim. As she rides away from them, Betsy reaches the boiling point. She rides after Jordan, and rips the rest of her blouse off. Jordan doesn't seem to mind a bit and continues to ride bare breasted around the field for all to see.

at the girls. Jordan recognizes Jim in his dress and wig and pulls him into her room to test him. While she basically performs a strip show for him, Jim does his best to keep his composure. Needless to say he is not very successful at it. Jordan literally turns up the heat (the thermostat) in her room and enjoys the reaction watching Jim sweat. Jim is later discovered by Christine, who gets irate when she learns that Jordan has been in a room with her alone. Jordan pretends to know nothing about Jim being dressed as a girl, however, her facial expressions tell otherwise.

Another hilarious scene is when Jordan shows up at the men's dorm looking for Jim. Jim has runaway for the weekend with Christine for a romantic getaway. Bubba (Michael Zorek), Jim's best friend, attempts to buy some time for Jim thinking he will be returning soon. In the process of trying to keep Jordan from leaving, several other friends sneak into the room and are hiding out to get a better look at her. They have placed bets on how many body parts they will be able to catch a glimpse of. Bubba spills pink champagne all over the front of Jordan's blue jumpsuit. As a result, Bubba suggests she take off her outfit which she does. Underneath, Jordan is wearing a nude colored bra with tiger print panties. About this time, Betsy (Kathleen Wilhoite), who is Christine's best friend, and Bubba's girlfriend shows up at the dorm. She opens the door in time to watch Jordan coming out of the bathroom with only a towel covering her bra and panties. Betsy is irate, and when she finds out that Jordan is there to see Jim, she spills the beans about Jim being off with Christine for the weekend. Jordan is now infuriated with Bubba for wasting his time, and uses some boxing gloves to begin pounding the defenseless boy. As she hits away, one of the boys hiding under the bed uses this opportunity to pull her towel off, exposing her in her underwear again. Slowly, each of the other guys in the room expose their hiding spots to her and Jordan erupts revenge on them.  Betsy and Jordan team up to knock Bubba out of the two story window.

At the end of the movie, they are having a "Parent's Day" visitation weekend. Jordan's dad arrives in his limo (driven by hilarious chauffer Ray Walston) with Mrs. Leigh-Jensen NUMBER 8, a blowsy stripper-type, whom he soon splits with to marry the school's sex teacher (Sylvia Kristel). 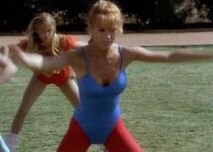 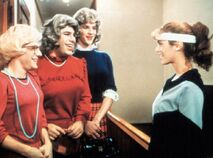 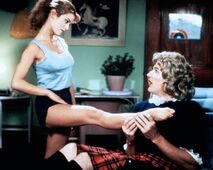 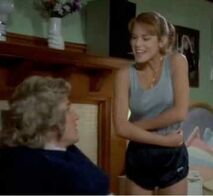 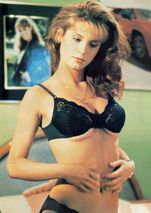 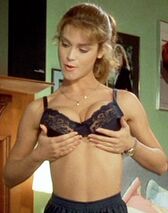 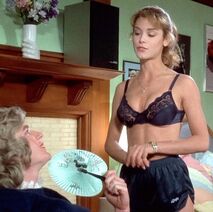 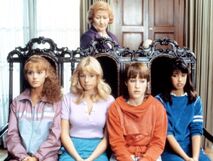 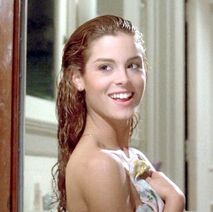 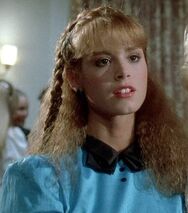 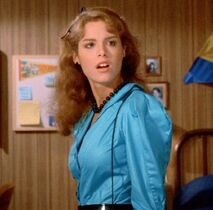 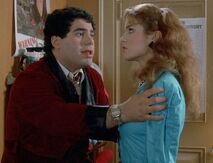 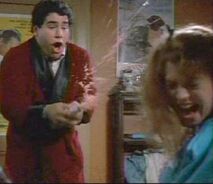 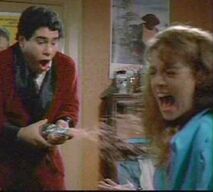 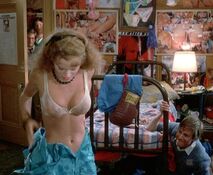 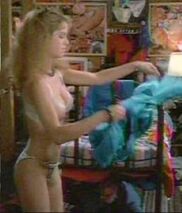 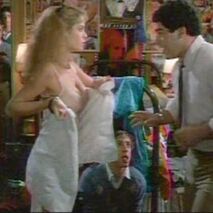 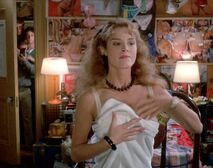 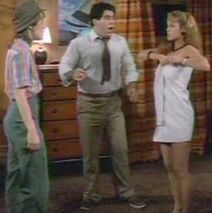 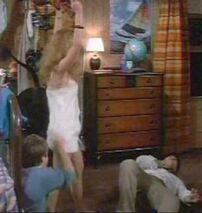 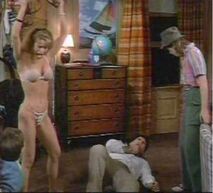 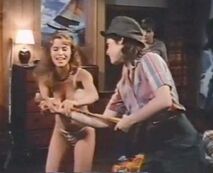 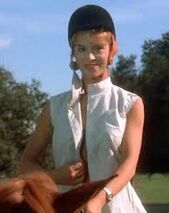 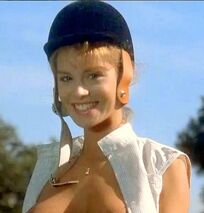 At graduation, the girls give a fond farewell to their private school!

Retrieved from "https://femalevillains.fandom.com/wiki/User_blog:Doalfe/Jordan_Leigh-Jenson_(Private_School)?oldid=170918"
Community content is available under CC-BY-SA unless otherwise noted.