Start a Wiki
Jean Montoya (Mari Blanchard) is a secondary antagonist in the 1958 film "Machete".

Sugar plantation owner Don Luis Montoya (Albert Dekker) gets married in New York and brings his much younger bride Jean back to Puerto Rico, unaware that she wed him only for his money. Friends at their San Juan honeymoon hotel recognize her as a notorious party girl, so Jean urges her husband to take her home right away, before the marriage has even been consummated.

At the plantation, Jean's arrival is met with mistrust by Luis' longtime protege, Carlos (Carlos Rivas), and by his cousin, Miguel (Lee Van Cleef), who help run the business. A drunken Miguel insults her and is slapped by Carlos. In vengeance, he attacks Carlos later with a machete.

Luis orders him to leave, but Miguel sabotages the cane-cutting machinery and is asked back by Luis to repair it. Jean, meantime, has fallen in love with Carlos, which results in Miguel planting seeds of suspicion with Luis against them. The greedy Miguel fears that Jean will inherit Luis's money.  Luis later catches the two in a compromising position, Luis chastises Carlos and later takes his new wife forcibly.

Miguel sets fire to the sugar field. Luis, believing that Jean is running off with Carlos, comes after them with his machete and is about to die in the blaze when Carlos comes to rescue him. Miguel is killed with the machete, and Jean dies during the ordeal as well. 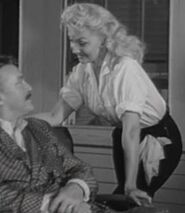 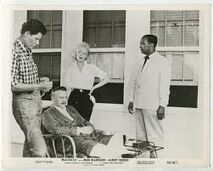 Add a photo to this gallery
Retrieved from "https://femalevillains.fandom.com/wiki/User_blog:Doalfe/Jean_Montoya_(Machete)?oldid=182892"
Community content is available under CC-BY-SA unless otherwise noted.