Jane Mitchell (played by Heather Thomas) is a villainess in the 1982 film Zapped. She is a snobby stuck up girl who thinks she is above everyone. Jane is the buxom blonde captain of the cheerleading squad and is later crowned the prom queen. The movie is a comedic take on "Carrie" and a number of other films that use telekinesis power.

In the movie, Barney Springboro (Scott Baio) who is the science nerd at Emerson High in Los Angeles who obtains the power after a lab accident. Barney uses his powers to take revenge on bullies, cheat at baseball, and strip girls of their clothes.

In the film, Jane gets her comeuppance on multiple occasions when she has her clothes stripped through telekinesis powers from Barney. On the first occasion, her sweater blouse is blown open a few times outside the school while talking to Barney and his best friend Peyton (Willie Aames).

Later at the high school senior prom, Jane is elected queen. Her sexy prom gown is once again taken off with Barney's powers. As a result, she throws a watermelon at him that hits him in the head. Barney once again strips her gown off and she is left trying to cover up with only her opera covered arms. She runs out of the gym with her pink colored stockings being held up with a pink garter belt.

The beautiful villainess is completely humiliated

Jane is stripped of her prom dress, leaving her in her underwear 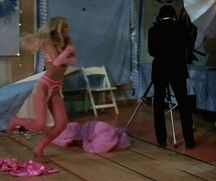 The gorgeous queen flees the scene crying and screaming

Add a photo to this gallery
Retrieved from "https://femalevillains.fandom.com/wiki/User_blog:Doalfe/Jane_Mitchell_(Zapped)?oldid=120447"
Community content is available under CC-BY-SA unless otherwise noted.
FandomShop DC Trivia GalaxyQuest